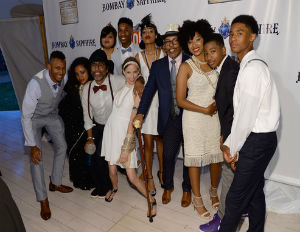 The Rush Philanthropic Arts Foundation celebrated its 20th anniversary with an Art For Life ‘Roaring Twenties’ themed cocktail party, auction and dinner in the Hamptons.

During an unfortunate time when art and music programs are being removed from schools nationwide, the Rush Philanthropic Foundation has made a profound impact across New York City and New Jersey areas by providing inner-city youth with significant exposure to the arts, as well as supporting emerging artists with exhibition opportunities. Over the past 20 years, the Rush Philanthropic Foundation has designed programs to “inspire students, provide positive alternatives to high-risk behaviors and support increased academic performance, Rush Education programs- Rush Little Kids, Rush Kids, Rush Teens and Rush Galleries in Schoolsâ€ — which directly serves over 3,000 students annually.

“Our mission is to empower people to think creatively out of struggle. We are encouraging art programs back into schools, the inner-city in particular. We need problem-solving, innovation, and artistic impression,â€ said Chairman and Co-founder of Rush Philanthropic Arts Foundation, Russell Simmons.

“This (foundation) didn’t happen by accident. We had parents who taught us to be socially responsible. We were on picket lines as children. Our mother was a painter, and we watched our father write and read poetry. So art changed us,â€ said Vice Chairman and Co-founder,Â Danny Simmons.

Grammy-nominated singer-songwriter, Elle Varner, wowed the crowd with her hit “Refill,” and Legendary R & B/hip-hop group, Bell Biv DeVoe, got the crowd up and out of their seats dancing when they performed a slew of classic hits like “Poison,” “Do Me,” and “Candy Girl.”

With a goal to raise funds for art education in schools and other programs that benefit emerging artists, Russell Simmons announced a clear call to action–for guests to sponsor a child at $1,000 for one full year. Several attendees like co-anchor of CBS This Morning and an editor-at-large for O’ Magazine, Gayle King, jumped at the opportunity to sponsor 10 children. “Art saves lives. It’s that simple.â€

In case you missed it, check out the photo recap on the following pages…

How to Avoid Unnecessary Bank and Credit Card Fees