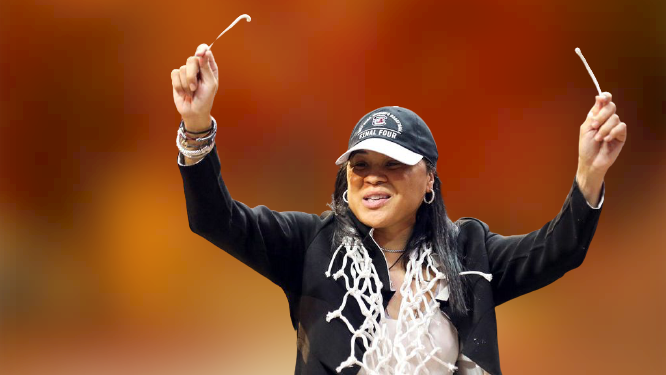 Nothing but net, indeed.

According to USA Today, South Carolina Gamecocks coach Dawn Staley fulfilled a promise she made to former Purdue Boilermakers coach Carolyn Peck, who won the NCAA championship in 1999. Back in 2015, Peck gave Staley a piece of the 1999 championship basketball net with a caveat: Staley was told that once she won her first title, she has to pass on the championship net.

After the Gamecocks won Staley’s first championship on April 2, 2017, she was known to wear the net from the game as an accessory. Later that month, Staley returned the piece of basketball net back to Peck.

Staley decided before the start of this season to make good on her promise to Peck. So, she sent a piece of the 2017 championship net to every Black woman head coach in Division 1 women’s basketball.

“After returning Carolyn’s piece of the net to her, I struggled to pick just one other coach to give mine to keep the tradition alive,” Staley wrote in a letter that was sent with each piece of the net. “It plagued me for months until I realized that it’s because I didn’t want to pick just ONE. I don’t want to count black women as National Championship coaches by one every few decades; I want us to do it so often we lose count!

“Looking [at] that net, the string knotted together to form a crucial piece of equipment in our game, I realized that’s what we as black woman head coaches are—a crucial part of our game all at different intersections along our journey to a National Championship. So, I pick ALL of you to receive that piece of our 2017 National Championship net in the hope that making our goal tangible will inspire you, as it did me, to keep pushing forward and us all to keep supporting each other in our journeys.”

According to Bleacher Report, South Carolina just locked Staley into a seven-year contract valued at $22.4 million, which matches the salary of UConn’s legendary women’s basketball coach Geno Auriemma. Under the new terms, Staley will earn a base salary of $1 million a year, with outside compensation beginning at $1.9 million. That secondary factor in her pay structure will increase by $100,000, bringing the outside compensation total to $2.6 million in year seven.