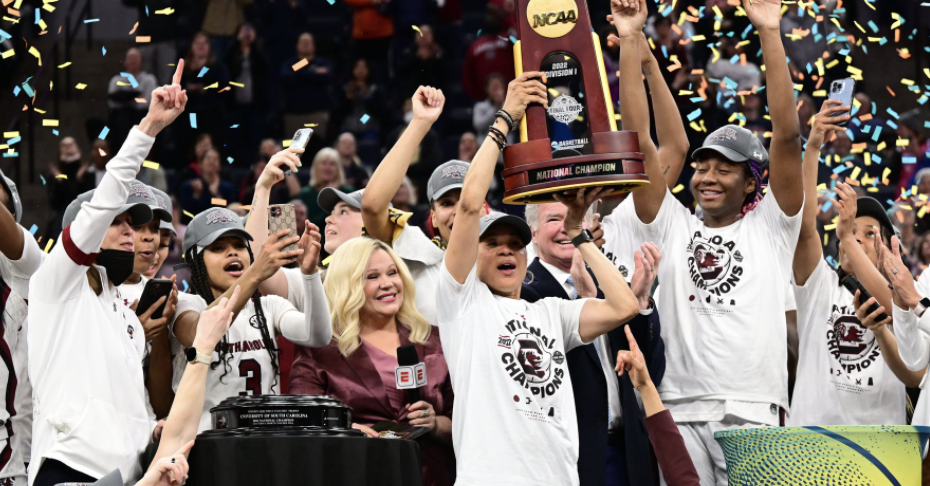 Staley’s Gamecocks jumped out to a 13-2 lead and never looked back, easily defeating the University of Connecticut Huskies and its 11-time national champion head coach, Geno Auriemma, 64-49. The loss was the first ever for Auriemma in a title game. He was 10-0 before Sunday’s loss.

“This journey of being a coach is truly gratifying and I have to reflect on this part of it,” Staley said at the postgame press conference.

“It comes with a great deal of pressure. Pressure because we were the number-one team in the country throughout the entire season. Pressure to come into the NCAA Tournament and be the favorites and certainly because of who we were up against today.”

“I felt a great deal of pressure to win, because I’m a Black coach, because if we don’t win, you bring in so much scrutiny,” Staley continued.

“You can’t coach, you had enough to get it done and just can’t. You feel all of that and you feel it probably 10 times more than anyone else because we’re at this platform.”

Staley won three gold medals for the U.S. Women’s Olympic basketball team as a player and a fourth as a coach. An WNBA player, Staley was named one of the Top 15 players in WNBA history by fans.

The Virginia University alum left the school as its all-time scoring leader and as the ACC’s all-time leader in assists. She was also inducted into the Women’s Basketball Hall of Fame in 2012 and the Naismith Memorial Basketball Hall of Fame in 2013. Staley coached at Temple University from 2000-2008, leading the women’s basketball team to six NCAA tournament appearances, including several while she played in the WNBA.

Staley took the South Carolina position in 2008, growing the program from the ground up and winning her first national championship in 2017.. She later sent a piece of the 2017 championship net to every Black woman head coach in Division 1 women’s basketball.