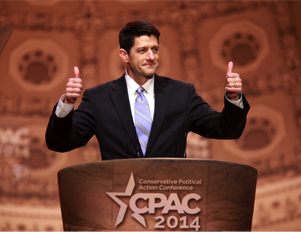 As a former vice presidential candidate, and current chair of the House Committee on Ways and Means, Ryan is clearly qualified for the highest leadership position in the GOP. What remains to be seen is whether he will be able to command the respect and obedience of the volatile House Freedom Caucus, which isÂ comprised of Tea Party heavyweights such as Presidential candidate Ted Cruz.

The now infamous resignation of current House Speaker, John Boehner (R-OH), and the chaos that ensued, revealed a deeply fractured Republican Party in desperate need of a unifying force. Once the former favored candidate for Speaker, Kevin McCarthy (R-CA), was sufficiently scared off by the wrath of the ultra-right wing House Freedom Caucus, GOP establishment leaders began looking to Ryan as their best option to salvage the party’s reputation before next year’s general election.

Initially unwilling to enter the race for Speaker, Ryan succumbed to the pleas of the GOP influencers who rallied around him after McCarthy’s withdrawal. During a Tuesday press conference, it was clear that the fates of both Boehner and McCarthy weighed heavily on his mind, causing him to hinge his candidacy on the fulfillment of certain preconditions.

Judging by the results of a hasty Wednesday night convening of the House Freedom Caucus, it seems that the most crucial of Ryan’s stipulations have been met. Ryan made clear that he would only succeed Boehner if the various warring factions of the GOP united behind him; especially the willful Freedom Caucus. As caucus members filed out of the late-night gathering, they confirmed that a supermajority would support Ryan. Rep. Raul R. Labrador (R-Idaho) said in a statement that the Freedom Caucus members had come to a “consensus that we need to move forward because it’s time for the conference to unite.â€ The promise of support from this supermajority is not the formal endorsement that Ryan was looking for, but according to a statement made by the Wisconsin congressman this morning, he clearly sees this as a positive development “toward a unified Republican team.â€