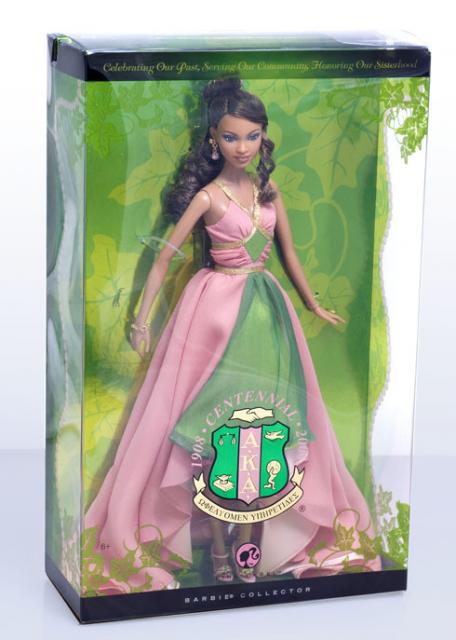 When Melanie Burke Delaney arrived in Washington, D.C., for the Alpha Kappa Alpha Sorority Inc.’s Centennial Convention, the Baltimore dentist had several goals in mind. “First, I was excited about celebrating the sisterhood and service,” says Burke Delaney, citing the overall mission of the nation’s oldest Greek letter organization founded by African American women in 1908 on the campus of Howard University.

The second-generation member also wanted to snag the new AKA Centennial Barbie, the first ever made by toymaker Mattel Inc. to honor a sorority. A sepia version of the iconic doll, dressed in a salmon pink and apple green evening gown reflecting the sorority’s official colors, was unveiled during the week-long convention, which ends today.

“I know the dolls will sell fast,” said Burke-Delaney, who stood with hundreds in line at Walter E. Washington Convention Center to purchase the limited-edition doll. “I wanted one for myself that will be a collector’s item to put on the shelf, and another for my daughter,â€ she said.

Retailing for $50, it will be available initially via the Barbie Collector catalog and Website in August, and later at retailers such as Wal-Mart.

The AKA Centennial Barbie is just one example of the buying power the sisters of AKA have demonstrated since some 25,000 of them began descending on the nation’s capital as early as last weekend. The sorority has 200,000 members in 975 chapters nationwide and around the world, including the Caribbean, Europe, and Japan.

As the women handle official business in sessions highlighting the convention theme of “Economics, Service and Partnership,” there have also been a plethora of social teas and parties, along with shopping, dining, hotel stays, and more. It all adds up, as the convention attendees pump dollars into the local and national economy.

“Between registered sorors and guests attending the convention, we easily believe that the economic impact here will be $100 million at a minimum,” said the sorority’s president Barbara A. McKinzie. “We come to Washington, D.C., every 25 years because our founders were here, and each time the city benefits.”

Elliott L. Ferguson, senior vice president of convention sales and services for Destination DC, the city’s official convention and visitor’s bureau, says the sorority is not only bringing in money, but breaking attendance and other records as well. “In terms of attendees, this convention ranks as one of the largest in terms of volumes of people–both those who are registered and those who aren’t,” he said.

The women of AKA–many clad in pink and green attire and carrying pink leather convention tote bags–have been a ubiquitous presence throughout the district since members began arriving as early as last weekend. Sorority members have been spotted everywhere, from Macy’s department store to a Subway sandwich shop near the convention site, where lines snaked out the door.