After Deadly Blaze, Concern For Brazil's Turn on World's Stage 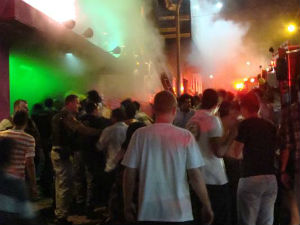 A nightclub fire in Santa Maria, Brazil claimed the lives over over 230 people.

Police in Brazil have arrested at least three people in connection with a nightclub fire early Sunday that killed more than 230, multiple media outlets are reporting. Already, the international business community has expressed concern about the country’s ability to improve safety and logistical measures on the eve of two of the largest sporting events in the world: the 2014 World Cup and the 2016 Olympic Games.

Government officials in Brazil have declared three days of mourning. In Santa Maria, a college town of 250,000, many families have already begun to bury the dead. Monday represented only the beginning of a probe which will seek to gauge much of Brazil’s ability to avoid preventable tragedies.

“Preventable disasters commonly claim lives in Brazil, as illustrated by Rio de Janeiro’s building collapses, manhole explosions and trolley mishaps,â€ the New York Times stated in a story today with reporting from Santa Maria. “However, the nation’s civil service has grown significantly over the past decade, tax revenues are soaring and there is no shortage of laws and regulations governing the minutiae of companies large and small.â€

Reuters today wrote that disasters such as Sunday’s serve as barriers to “achieving the country’s lofty, first-world ambitions.â€

“The cause of those deaths wasn’t anything complex. They were simple elements — administrative flaws, regulatory flaws, inspection flaws, planning flaws. They all led to tragedy.”

Read analysis of the fallout from the nightclub fire tragedy at Reuters.