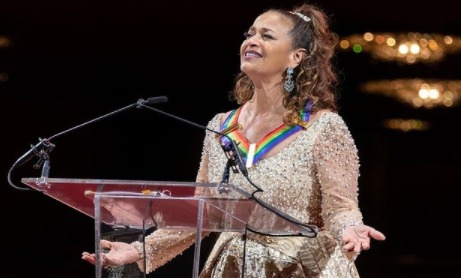 Actress and choreographer Debbie Allen was among the artists honored earlier this month at the 43rd annual Kennedy Center Honors.

On the Kennedy Center’s website, Allen remarked that she is humbled to receive the honor.

“This is so much more than our nation’s Highest Artistic Award, it is a measure of how my footprint has resonated as a path of light over the years and in this time of tremendous uncertainty, fear, and search for hope. This glorious achievement I share with my family, mentors, and students who have inspired and pushed me all the way. I look forward to being part of a fresh start for America and reminding the world how essential the Performing Arts are in our lives. Much Gratitude,” Allen added.

The legend did not take all of the credit for the prestigious honor. On the Kennedy Center’s Instagram account, Allen shared the recognition with her family and community, including actress Phylicia Rashad, her sister. Some of her family members were in attendance.