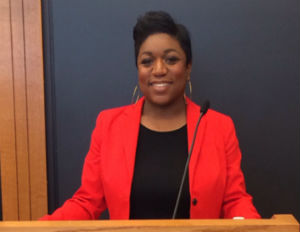 Dyer, who’s a native of Philadelphia, first came to the White House in 2009 as a 31-year-old intern in the Office of Scheduling and Advance. She was hired full-time in 2010 for the role of associate director for Scheduling Correspondence and was later promoted to deputy director and hotel program director. In this role, Dyer traveled with the President and First Lady and worked on matters pertaining to press, lodging and site logistics. In 2013, she was promoted to her current role as director and deputy social secretary.

“Deesha shares our commitment to a White House that reflects America’s history, highlights our culture, and celebrates all Americans. Michelle and I look forward to working with her in this new role as we welcome visitors from across the country and around the world to the People’s House,” said President Obama in a statement.

Prior to starting her career at the White House, Dyer worked at Pennsylvania Real Estate Investment Trust from 2001 to 2010. From 2003 to 2010, she also worked as a freelance journalist covering hip-hop for several different media outlets including The Philadelphia Citypaper. In addition to her years of work experience, the Philadelphia native has also served in several community advocacy roles including her work with young adults at the Youth Health Empowerment Project, her role as creator of a hip-hop AIDS program based in Philadelphia and as a CARE advocacy volunteer and board member at Action AIDS. Since moving to that nation’s capital, Dyer has also volunteered with the homeless community in Washington, D.C. and served as a mentor in the First Lady’s mentee program.

First Lady Michelle Obama congratulated Dyer on her new position and said in a statement that she has always been impressed by her work and is “thrilled that she has agreed to continue her service as [their] Social Secretary.”

With a bio that reads a bit different from a seasoned politician, Dyer returned to college at the age of 29 to earn her associates degree in Women’s Studies from the Community College of Philadelphia. In an interview Vogue did earlier this year with departing Social Secretary Jeremy Bernard, she opened up about how people from her hometown have responded to her latest career accomplishments.

“When I go home to Philly, you would think that I was the First Lady,” she says. “They have no idea. Some of my family have never even been to D.C.”

Dyer says that she’s honored to be continuing her service under the Obama administration and is “constantly inspired by the the openness, diversity and traditions of [the] administration.”