DEI Advocates Accuse Black DJ of Wearing Blackface at Charity Event, Except It Was His Actual Face 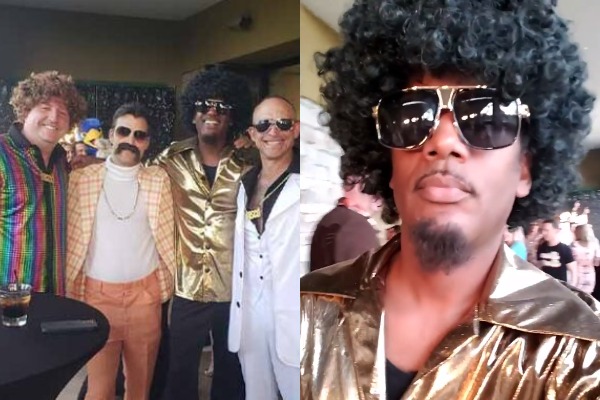 Two diversity advocates based out of Scottsdale, Arizona, are apologizing for accusing a school district of hiring a DJ to perform in blackface, only to find out that the DJ is a Black man.

Stuart Rhoden and Jill Lassen were convinced that the Scottsdale Unified School District’s Hopi Elementary PTA hired Kim Koko Hunter, 56, to DJ a charity event while covered in blackface, NY Post reports. Rhoden and Lassen both saw a photo of Hunter standing alongside three white men at the ’70s-themed party and assumed the DJ was donning blackface.

Lassen, a white co-chair for the Scottsdale Parent Council (SPC) DEI Committee, sent an email to the PTA accusing them of hiring a DJ wearing blackface. But the PTA was quick to shut down the false allegations, as captured by Arizona Daily Independent.

“The DJ that the Hopi PTA hire[d] was, in fact a Black man,” Hopi PTA president Megan Livengood wrote in response to Lassen’s claims.

“It is insulting that you feel myself or PTA condone racist behavior or encourage it by posting on social media.”

Once it was determined that Hunter was in fact a Black man, Rhoden, an instructor and member of Scottsdale Unified’s Equity and Inclusion Committee and the Scottsdale Human Relations Commission, shared a Facebook post insinuating that Hunter had darkened his skin ahead of the DJ gig.

“Let me be clear, a Black man, apparently in Black face is an entirely different discussion than a white person,” Rhoden wrote. “However, I did not state that the person was White. It was assumed that was my intent, and perhaps it was, but nonetheless, looking on his FB page (photos below), it seems at the very least he is in darker make-up if not “Black face” or I am completely mistaken and it’s the lighting of the patio.”

However, Lassen did apologize saying the critics should have done their research before making the bold allegations.

“I cannot fathom the hurt, anger and frustration you felt after you and others volunteered countless hours on your event,” she wrote in response.

Hunter later took to Facebook Live to address the melee and seemingly understood why so many people assumed he was in blackface since he was the only Black person in the photos.

“Was I not Black enough? How Black do I got to be for people to know that I’m an actual Black person,” he said.