Not everyone can make it to the National Mall in Washington D.C., but those who can’t are making sure that they find a gathering in their own communities. On Harlem, New York’s far east side, more than 5,000 students, teachers and community residents are gathering to watch the inauguration of President Barack Obama. Students of all races are bubbling over with excitement and the adults aren’t too far behind. Steve Wonder’s song “You can feel it all over” is pumping through the speaker at the huge gymnasium while students wave American flags and dance in aisles.

The inauguration will be projected on three huge screens while local residents enjoy entertainment from the Harry S. Truman marching band, the Harlem Youth Marine Corp Color Guard, African Drummers, and pep squads from different schools. The fact that 30 schools from across Manhattan will be joining Democracy Prep thrills Monique Grocia, 13. The eighth grader is excited that other schools is coming together with theirs to commemorate this moment in history. “Our school is motivating us to be the best that we can,” says Grocia who is inspired by a mural at her hospital. “It says Rosa Parks sat so that Martin Luther King Jr. could march, so that Barack Obama could run, so that our children could fly. That is what our school is preparing us to do.”

Lt. Desmond Edmond, 25, attended the event with teens from the Harlem Youth Marine Corp Color Guard, an after school program that teaches teens discipline. “He’s already hit the ground running. He is not going to let congress push him around,” says Edmond, who is excited to witness the first black president. “I sense that Obama is a family man. He has a connection with people.”

Even people without school-age children are joining in so that they can say they experienced the excitement with others.

“I want to be a part of history,” says Arlene Jeanty, 43, an MTA train operator. “I’ve been waiting for this day for a long time. I anticipate that he will bring the country together and give us hope that we can carry on to bigger and better things. Jeanty doesn’t know if her 15 month daughter knows everything that is going on, but she knows that her son feels it is exciting to see someone who looks like him succeed. “It is different for him to hear his mother say you can be all you can be then to see that it is true.” 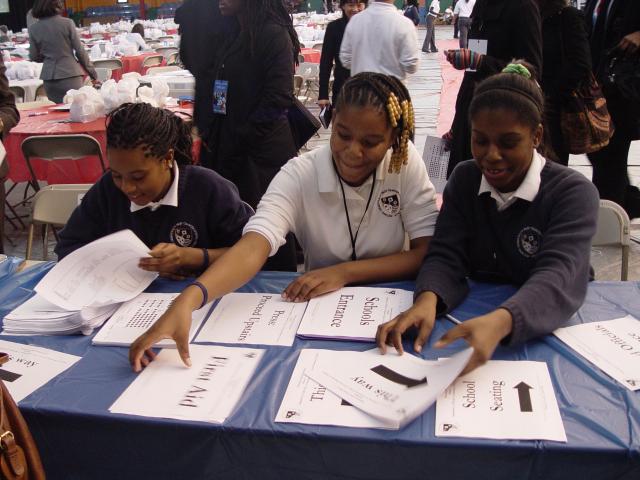 Marcia A. Wade is a reporter at BlackEnterprise.com