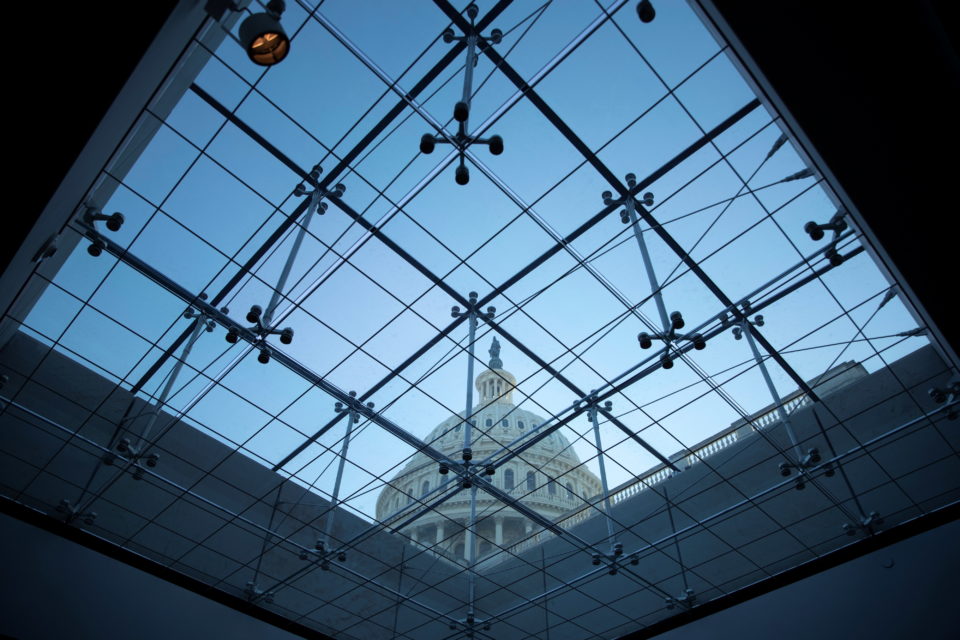 The U.S. Capitol seen through a skylight window at dusk on Capitol Hill in Washington, U.S., September 29, 2021. REUTERS/Tom Brenner

Reuters – President Joe Biden’s domestic policy agenda appeared to be at risk in the U.S. Congress on Thursday, as his fellow Democrats struggled to line up support for a plan to double spending on roads, bridges and other infrastructure.

The No. 2 Democrat in the House of Representatives had a one-word answer when reporters asked if he was confident the $1 trillion bill would pass in a vote scheduled later in the day.

Failure would be a stinging setback for Biden. The infrastructure legislation has already passed the Senate with Republican and Democratic support. But it could fall victim to an impasse between Democratic moderates and progressives over a multitrillion-dollar bill that would bolster social services and tackle climate change.

Lawmakers on the party’s left flank have said they will not vote for the infrastructure bill unless they feel certain their priorities will be reflected in the social-spending bill.

Senator Joe Manchin, a key Democratic moderate with the power to block legislation in the Senate, said on Thursday that bill should cost no more than $1.5 trillion – far lower than the $3.5 trillion price tag floated by Biden.

House Speaker Nancy Pelosi, who had earlier promised moderates a vote on the smaller $1 trillion infrastructure bill this week, predicted the party would ultimately resolve its differences on both pieces of legislation.

“We are in a good place right now. We are making progress,” Pelosi said at a news conference. But she declined to say whether it would pass.

With razor-thin majorities in Congress, Democrats cannot afford to lose many votes if they want to pass their agenda. And they are unlikely to win much support from House Republicans eager to take back the majority in the 2022 midterm elections.

Meanwhile, Congress was poised to approve new government funding through Dec. 3, which would head off the risk of a partial government shutdown when current funding expires at midnight. Both the House and the Senate were expected to pass the temporary funding bill by that deadline.

Republican leaders in both chambers said they would support that legislation.

Besides keeping government operations running, the stopgap spending bill would provide aid for communities hard hit by hurricanes, wildfires and other natural disasters. Money to help Afghan refugees is included as well.

Manchin’s proposed price tag of $1.5 trillion was sure to rile progressives, who initially proposed $6 trillion in new spending. On Thursday, he said the bill should also help natural-gas producers, who have a large presence in his home state of West Virginia. Environmentalists have said natural gas is not a long-term energy solution.

Manchin also said lawmakers should first sort out what taxes are needed to cover the cost of new spending. He said the differences could take weeks to resolve.

Another Democratic moderate, Senator Kyrsten Sinema, has met with Biden multiple times to discuss the bill but has not publicly said how large she thinks it should be or what it should look like.