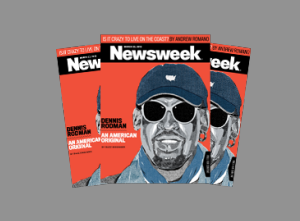 It’s a bold summation for anyone, let alone Dennis Rodman, one the NBA’s most eclectic personalities ever and in the history of sports. But the sometimes-almost-as-eclectic writer Buzz Bissinger has penned an article on what he says is the smartest move Rodman has ever made.

As the nuclear capabilities and indignation of North Korea’s aspirations come into question, this much is clear: Rodman’s move was one that, while risky, exposed the entire world to a firebrand world leader in Kim Jong-un, who, let’s admit, we knew nearly nothing about. That changed a bit. And it changed without catastrophe.

Bissinger says that Rodman’s been through a lot in his life, but nothing as unlikely as this.

“But creating the tempest that no athlete in modern times has created by yukking it up several weeks ago with North Korean leader Kim Jong-un despite a record on human rights that is likely the worst of any country in the world?” Buzz writes. “No.”

“Not even Dennis Rodman seemed remotely capable of such accomplishment.”

Read the rest of Bissinger’s colorful essay over at Newsweek.