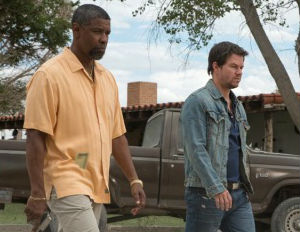 Today (August 2), Denzel Washington and Mark Whalberg will come together in theaters nationwide as the most unexpected cop duo to hit the big screen in the Universal Studios comedic action-packed drama, 2 Guns. Washington, an undercover DEA agent, and Whalberg, an AWOL naval intelligence officer, are giving audiences improv and scripted comedy at its best as they go on the run from the very organizations that employ them after being double crossed at the end of a year-long operation that was unknowingly illegal from the start.

“We’ve known each other for a while, but I think what surprised me was just how willing Denzel was to just try anything,â€ said Whalberg said during a New York press conference held this past Sunday (July 28). Washington quickly cut in to add to his co-star’s work impression. “[When] I heard that Mark was involved [in the movie] I was like, ‘Oh okay, I can be safe…I knew Mark was not just funny; he has a warmth and a heart about him that I’ve loved.â€

As Denzel, Mark, Paula and other cast members met in the Big Apple this past Sunday to bring the Baltasar-directed film to life, BlackEnterprise.com and other media tastemakters gathered to find out what the $74 million Hollywood flick had up its sleeve. From hysterical, indecent humor to unpredictable action, find out what Tinseltown’s A-listers had to say about their latest Blockbuster hit.

It’s the first time you two have worked together. What surprised you about each other?

Mark: We’ve known each other for a while, but I think what surprised me was just how willing Denzel was to try anything. We wanted to add some humor and shake it up a bit and combine comedic elements with the dramatic aspect of the movie.

Denzel: I would say the same thing. I’ve been looking to kind of stick my toe in the water. [After] coming off of Flight, I was looking to do something to have more fun so when I read the script and I heard that Mark was involved I was like, ‘Oh okay, I can be safe because I knew Mark was not just funny he has a warmth and a heart about him that I’ve loved–I watched Ted the other night too, man! That’s a sick movie. How did you do that fight scene? You got spanked–so I wasn’t ready to get spanked yet, but he helped free me up to just go for it and [not] worry about being too silly.

The chemistry between the two of you is so delicious and wonderful, what did you do to bond?

Denzel: We went to Lamaze class together [laughs]. We’re neighbors–

Mark: We’ve known each other socially…we both have four kids. I was constantly able to ask him for advice and pick his brain about things both personally and professionally. [But] we’re both professional, so even if we didn’t spend time hanging out we would just come and do our job, and we would enjoy our job. We’re both serious about our job, so it would just kind of work or it doesn’t–

What do you think is harder? Making audiences laugh in a comedic role, or making them emotionally invested in your character in a drama?

Denzel: For me, I have less experience with this, so I won’t say it’s harder, but…that’s why I wanted to go out there with somebody who I know knows that territory better than I do. Some of the stuff that Mark was doing, I was like, ‘If he can do that, I can just go for it!’