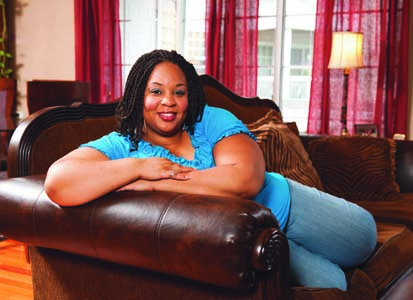 A diagnosis of cervical cancer at the age of 25 changed Tamika Felder’s perception of so-called life challenges, such as work troubles and disappointing relationships. “Cancer taught me that you can waste your time on silly things,â€ says Felder, now 36.Â  Though a radical hysterectomy, chemotherapy, and radiation eventually ridded her body of the disease, Felder sank into a deep depression, mourning the loss of her fertility. Regaining a peaceful state of mind took effort. “I had to will myself out of my negative situation,â€ she says. “I had to decide to be happy.â€

Felder discovered firsthand what science and mental health experts have been saying for years. Happiness isn’t a consequence of your station in life; it flows out of how you decide to respond to life. “You will always have joyful times and sad times,â€ says D. Kim Singleton, Ph.D., a clinical psychologist based in Washington, D.C. But happiness is about maintaining a sense of peace despite those highs and lows, Singleton asserts. “You determine and create the happiness you want in your life.â€

We have a genetic tendency to be happy or unhappy, says a study by psychologists at the University of Edinburgh and researchers at Queensland Institute for Medical Research in Australia. Our happiness is also affected by what happens in our lives and what we think of it. Many people attach happiness to perceived sources of security and comfort, such as money or marriage. But a Princeton University study shows that once life’s basic needs are taken care of, happiness and emotional well-being no longer improve with increased income. Moreover, a report published by the American Psychological Association shows that increases in financial wealth can erode happiness. For those who connect marriage to happiness, a study by researchers at the University of Zurich in Switzerland published in 2005 found that happier singles are more likely to get married. And if you think health dictates happiness, a 2005 study by the University of Michigan Health System found that people with severe illnesses and disabilities have about the same level of happiness as those who are healthy.

Getting to happy
Happiness may be challenging to find because most people may have been groomed to identify with or expect unrealistic, unsustainable characteristics of this seemingly elusive state. Is it excitement and exhilaration, or feelings of peace and satisfaction? Jon Gordon, author of The Seed: Finding Purpose and Happiness in Life and Work (Wiley; $22.95), says it’s more the latter. It’s not your circumstances that make you happy, he says, “It’s your perspective that makes you happy.â€

Felder’s breakthrough came when she realized that waiting for happiness would lead to more bouts of self-inflicted depression. Her impatience to feel better led her to take certain steps that brought positive results.

Give in to your emotions. Allow yourself to indulge in feelings of anger, disappointment, or grief–but with a deadline. Felder gave herself a limited time to attend her pity party. “I say I’m going to rant and rave on this day. On the second day I’ll mourn it. On the third day I’m over it.â€

Mentally shift your focus. We often allow ourselves to be held hostage by our thoughts, when the truth is our thinking is where we can exert greater control. Felder could have focused on her cancer as a problem, but she decided she would start looking for the positive in every situation. Yes, she had cancer, but her illness resulted in quality time with her mother, who spent three months with her, helping her recuperate. “In a weird way I’m grateful to the cancer because of the time that I had my mother to myself.â€
Find a greater purpose. An extension to focusing on the positive can be cultivating opportunities to help others. Felder realized she didn’t have time to feel sorry for herself when she was serving others. So, in 2005 she founded Tamika & Friends Inc. (www.tamikaandfriends.org), an organization dedicated to prevention, support, and raising awareness about cervical cancer. Even today, whenever she feels down, she considers her greater mission. “I almost lost my life at 25. I’m grateful for all the things I’ve accomplished in the last 10 years.â€