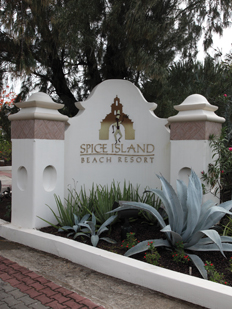 In December 2004, Queen Elizabeth II bestowed one of the United Kingdom’s highest honors on Sir Royston O. Hopkin: Knight Commander of The Most Distinguished Order of St. Michael and St. George, for his contribution to tourism in Grenada and throughout the Caribbean. It was a crowning distinction for a self-made man who left school at 17 and built a stellar career as an advocate and entrepreneur in the tourism industry.

Situated on the south side of Grenada on Grand Anse Beach, the then 20-room Spice Island Inn was purchased by Hopkin in 1969 with a group of investors. By 1978, he partnered with his two brothers to buy Blue Horizon Hotel (today Blue Horizons Garden Resort, located across from Spice Island). But in 1987, Hopkin had his own ideas for expansion and purchased controlling shares of Spice to become owner and chairman. By 2000, the property had been renamed Spice Island Beach Resort, and underwent a $6 million renovation, expanding to 66 suites. Hopkin’s biggest challenge came when Hurricane Ivan destroyed three-quarters of the resort in 2004. But the tragedy became a source of inspiration to build a world-class resort. “I needed to reopen at the level of a Ritz boutique or a Four Seasons boutique,â€ he recalls. “But I didn’t want the look or feel of [those properties]. It had to be Caribbean.â€

With a $12 million investment, the newly renovated, family-run luxury property reopened in December 2005, featuring 64 rooms, with 32 beachfront suites and 17 additional suites with private, non-chlorinated, residential-size swimming pools. The suites are outfitted with Italian porcelain tiling, hardwood furniture from the Far East, Hansgrohe bathroom fixtures, Frette linen and bathrobes, full entertainment centers, chaise lounges, hammocks, and a host of other amenities. There are two open-air restaurants: Oliver’s, renowned for its seven-course dinners, and Sea and Surf Terrace & Bar for light dining and cocktails. In-room dining is available 24 hours a day.

Gatsby Boutique sells high-end resort wear, and spa Janissa (a combination of his daughters’ names) has a range of restorative treatments. Spice Island has since won numerous awards and recognition for everything from energy-saving initiatives to high-end customer satisfaction. For six consecutive years the resort has won the “Gold Awardâ€ from Virgin Holidays as the No. 1 property in its exclusive Platinum Collection, beating out internationally renowned luxury properties throughout the world.