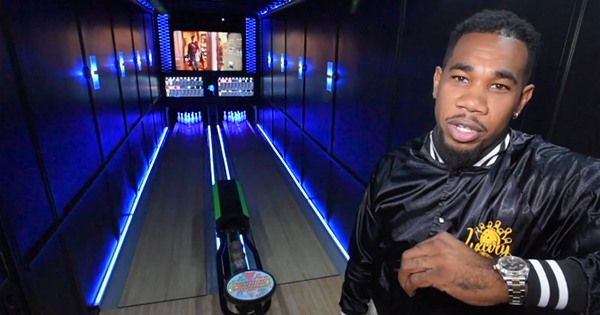 Jackson, who is 34-years old, has reinvented the idea of physical entertainment after realizing how companies such as Amazon, Grub Hub, and Uber provide convenience and ease in the shopping, eating, and traveling industry. He thought of making a bowling alley accessible by making it mobile and that’s when Luxury Strike Bowling was born.

“These companies made life easier for people and created economic growth worldwide, and I wanted in,” Jackson told The Detroit News.

Luxury Strike Bowling’s design, which has been years in the making, has a few differences from the traditional bowling alley. Its two automatic bowling lanes are shorter and the bowling balls are smaller, weighing only 3 pounds. The bowling alley also features a scoring system, temperature control, neon lighting, an 80-inch theater screen, a sky lounge, and a state-of-the-art sound system that guests can connect to through Bluetooth.

Building the bowling alley was not without obstacles as it was often slowed by the unavailability of materials due to the pandemic. But Jackson was finally able to launch it last Juneteenth. The alley, which includes a loft that can accommodate 10 to 15 people, is now available for parties, corporate gatherings, church gatherings, and other events in Southfield and other nearby areas.