Will Gov. Deval Patrick of Mass., Become the Next Black Senator? 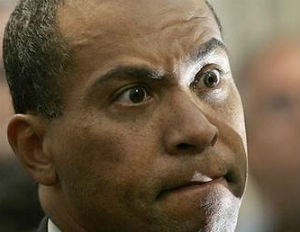 The U.S. Senate currently boasts no black members, which is sort of the status quo – there have only been six blacks ever elected to the Senate, including Barack Obama. But Mychal Denzel Smith at theGrio writes that Massachusetts Gov. Deval Patrick, the nation’s lone black governor, should appoint himself to the Senate if the state’s senior senator John Kerry, is picked to replace Hillary Clinton as secretary of state, as is widely expected.

In recent history, a few have made breakthroughs, the most obvious being the president. Patrick is another, being elected Massachusetts’ first black governor and only the second black governor elected in the entire nation, after Douglas Wilder in Virginia.

On a personal note, appointing himself Senator would bolster his own resume, loading it with both executive and legislative experience, were he to one day want to seek the presidency.

Patrick would also be a natural ally for Obama in the Senate. They have the Harvard Law School connection, the historic nature of their own elections, and represent a new breed of black politician that has become more viable in national politics. And as Democrats try to build a more progressive coalition to push through their agenda, they could do worse than having someone who served as an Assistant Attorney General in the Clinton administration’s Department of Justice, doing work in the Civil Rights Division on issues of racial profiling and police misconduct. It’s perhaps one of the things Obama and Patrick discussed over dinner this past Friday.