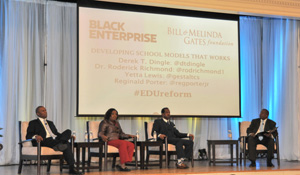 During the second session of BLACK ENTERPRISE/Bill & Melinda Gates Foundation symposium recently held in Memphis, panelists and attendees explored the elements required to produce high-performance schools and the business community’s unique role in the process.Â  Just how do educational institutions adopt business practices to increase productivity among an array of stakeholders, including administrators, teachers, parents and students. In the following excerpts from the panel, “Developing School Models That Work,” Editor-In-Chief Derek T. Dingles poses such questions to speakers Dr. Roderick Richmond, chief of school operations, academic operations, technology and innovation for Memphis City Schools; Yetta Lewis, chief academic officer at Gestalt Community Schools, a charter school management association that serves K-12 scholars; and Reginald Porter, a commissioner with the Memphis/Shelby County Board of Education.

What are the building blocks for effective schools? What can business do to provide that support?

Reginald Porter: I am a Project Advisor at FedEx. My other full-time job is being a board commissioner. I serve the southwest area of Shelby County, District 6. I have a lot of families who have a median income of $10,000. When I’ve had the opportunity to go into the schools, a lot of them which are not doing well, one of the things I noticed is that there’s an absence of black men. I’ve taken it upon myself to go out into the community, be an advocate for the school system, be a cheerleader for the school system, for the things they’re doing right, but personally going out and touching the parents and letting them know that I am a servant for them and the children in the community.

We’re lacking men in the teaching profession [and] in the visibility perspective. We have a program called Watchdogs that’s been very successful in Memphis City schools. The kids have an opportunity to see men in the community come out and watch over the kids as they walk into the schools, talk to them. But we have to do more to expose our kids and have them get more accessibility to other careers.

So would you be interested in seeing more businesses sponsor schools?

Porter: I would love to see a FedEx High School [or] a BLACK ENTERPRISE High School of Journalism. I would love to see an ESPN school of athletic endeavors which talks about everything from being on the field to being owner of a team [and] integrates the core curriculum of our schools. I think that’s how businesses can help out. If they really want to get involved, start a charter school.

Yetta, what approach do you take in creating effective schools?

Yetta Lewis: I think we take a slightly different approach in that we seek business partnerships to better enhance the school. So for example, in 2008 we opened our first charter school to about 125 sixth graders in the Hickory Hill community. In 2008 the home ownership foreclosure rate was extremely high, bankruptcy was high, and businesses were moving out of that community. So the focus was to open a school [of] entrepreneurship and business and build a curriculum around it. It wasn’t enough to hold workshops for individual parents. So as we leveraged in our community FedEx and SunTrust Bank, we were able to open a youth bank by having SunTrust train and mentor our students. We believe that there’s a key role for not only in integrating business into the curriculum but having business leaders as thought partners. When you run a school, you are the CEO of that school. And it’s equally important to have a school leader that is an instructional leader but also has business know-how.Â  For Hickory Hill our assets were SunTrust Bank, [using them to develop] a financial literacy curriculum so that sixth graders learned how to balance checkbooks.

How do you enlist stakeholders and get all of them on the same page?

Yetta Lewis: [When we developed] Gordon Science and Arts Academy, we’re in a community where there is the medical industry as well as the arts community. So for us it was building those partnerships and being around mission-driven events and revitalization efforts prior to opening the school. That’s been our approach since we started.

How do you go through the process of identifying a school to restart, shutter transform or turn around?

Dr. Roderick Richmond: School reform is not a top-down mentality nor bottom up. It’s somewhat the meeting of both. What we’ve tried to do is to look at our schools, in particular those schools that may be in high priority. Our district is moving toward in the merger that’s called multiple paths to autonomy. We’re looking at schools that may be traditional schools. We’re looking at schools that within their traditional setting may be schools with certain levels of autonomy. And then we also have what would be called our high-priority schools [under President Obama’s Race to the Top program]. We try to include all stakeholders in that process so that we can decide which model best fits that school and that community. All stakeholders should be involved in these processes. Individuals should feel that they have a voice and that [it] is not going to be silenced by politics.

How do you make sure as you’re matching priorities to schools and communities some students aren’t left behind?

Porter: As a representative, I’m engaged with parents constantly. I’m engaged with the community constantly…trying to do my best as a board member but not to usurp the authority of the superintendent. I think people need to understand that there’s a difference between a board member and a superintendent. The board members hold the superintendent accountable for all of the actions and non-actions within a school system and we’re there to support him. But I want to make sure that when we talk about stakeholders we make sure we broaden our scope…make sure we hold our elected officials to the fire.

Lewis: So the thought around expanding the stakeholders, specifically around the parent piece, I think is critical. I think we’re doing a better job in communicating to the parents. But when you bring parents to the table, many have had just a horrible educational experience. They become detached because they don’t think they’re empowered to really be a stakeholder at the table. We want our parents to feel ownership in any school that we open. We want the students to have a voice. Sometimes we forget about that when we talk about stakeholders. You can ask any student even at an elementary level [and] they’d know the difference between an inefficient, mediocre teacher and an excellent teacher. They could tell you spot on.

How do you develop administrative leadership models that develop a productive, engaging culture?

Lewis: I think that’s something we’re grappling with now. The realization is it takes a nontraditional person sometimes to run a school. A traditional principal may come through the ranks of serving years as a teacher and years as an assistant principal so that there’s this grooming process that says you need 20 or 30 years in order to run a school effectively. And while we believe that a leader needs experience, it’s the type of experience that they have. It’s not just instructional but there are business skills that they can learn to build more strategic partnerships in their schools, handle finances, better staff, look at quality control. It’s finding the balance between education and business.

If it takes a business approach to run schools so they’re effective, why not tap business people to run the schools?

Richmond: Well, I think in schooling you have what’s called both technical and adaptive work. There’s never one size fits all. What Yetta is speaking of is the model that Gestalt uses, and that particular model has worked for them. So that leads us back to when the question was asked about best practices. In traditional education there are some barriers, whether you want to look at those barriers as being good or bad, that may not allow for some of the innovation that occurs in charter schools. You’re looking at two separate models. I encourage and tell principals that they do have to somewhat have a business mentality. But even in marketing your schools and making sure you’re efficiently running your school, there’s still another component. And that component is being the instructional leader of that school.

Porter: One of the things that we look at is trying to identify what issues there are that are contributing or not contributing to the success or failure of the schools. I have to give credit to the Gates Foundation and the work that Memphis City Schools has done with the Teacher Effectiveness Initiative because it really was great as far as exposing some areas of vulnerability in some of our instructional leaders. That tool itself should be used to identify areas of professional development. Hopefully, you will have a revitalization of certain schools by helping teachers understand how they can improve.

What are some of the other factors in developing a sustainable model?

Reginald Porter: I know a school that has adopted a model based on a couple of [guiding principles]. One, failure is not an option. That’s instilled from the principal on down through the teachers to the students. The other thing is that they have site-based leadership, and the principal does a good job of making sure he has students, parents [and] teachers. He has a lot of incentive programs that have helped the students really get involved and want to be a part of the school. He’s got this [program] that’s a bit controversial right now in which kids who attain certain levels of achievement, gains, or excel on the ACT have certain privileges that other kids only aspire to get…little simple things like getting line first, going to a free basketball [or] football game, things like that. The kids really love it. It was a product of parents, teachers, students and alums getting together .

Yetta, how do you ensure that your schools maintain their standards and culture?

Lewis: We focus every school on the three C’s. You’re going to be college ready when you leave our schools. And that means not just to get in college but to graduate college. You’re going to be career ready. We have schools that focus on STEM, and fine arts, and mathematics, but there’s some soft skills in the business world that we need to focus on. Grit. Determination, Teamwork, critical thinking. Focusing on that also makes you career ready. And then community ready. Are you propelled to leave your community better than you found it? So those are the core principles, regardless of what school, regardless of the change of leadership, that guide our mission to serve the students.