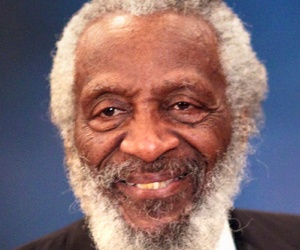 In a recent radio interview, activist and comedian Dick Gregory slammed director Spike Lee by calling him a “punkâ€ and a “thugâ€ for his “duplicity and lack of foresight.”

Gregory also said that Lee is the same man who brought us She’s Gotta Have It, and dressed Malcolm X in a zoot suit in the self-titled film.

Gregory says whatever Lee is mad about is something that happened a long time ago, and he’s happy Spike Lee’s attempt to ambush the movie didn’t work.

Gregory also said he’d never seen a black man and a black woman ride off into the sunset in a movie, and that’s part of the beauty ofÂ DJango Unchained.