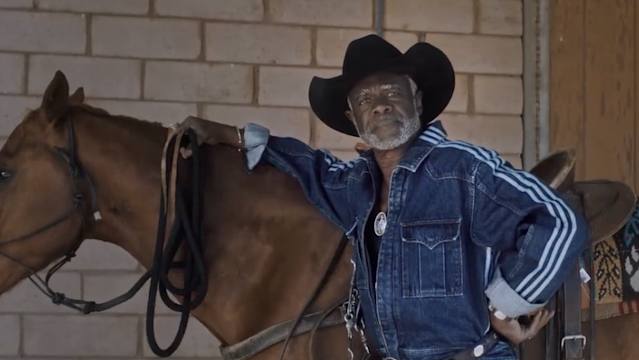 Best known for his roles in Cooley High, A Different World, The Wire, and House of Lies, Turman had already gained a local reputation as a cowboy long before launching a career in Hollywood. He was finally able to combine his two passions into one while serving as the face for Beyoncé’s new rodeo-inspired Ivy Park collection.

The Emmy Award-winning actor and acclaimed rodeo champion spent 30 years competing as a cowboy and has the awards to prove it. Now, at 74, Turman is happy he could highlight his love for the rodeo as the face of Beyoncé’s new campaign.

“I’m in the hippest campaign,” Turman told Variety. “It doesn’t get any cooler than that!”

Having the Ma Rainey’s Black Bottom star thrust back into the spotlight, fans have taken to Googling and looking into his life and career. For those born after 1984, we might not remember or even know that Turman was once married to the Queen of Soul herself, Aretha Franklin.

The two first met at a benefit party for the charity Giant Step in 1977 and started dating shortly after, Oprah Daily reports. By March of 1978, they were already engaged.

With it being the second marriage for Franklin after her rocky first marriage to Ted White, Franklin wanted to enjoy her first fairytale wedding with Turman.

“Because she and Ted White had basically run off to marry, Aretha felt that she had missed out on a storybook wedding. She was going to make up for that with Glynn,” Franklin’s cousin and backup singer Brenda Franklin-Corbett said in Respect: The Life of Aretha Franklin.

“No one loves to throw herself a party more than Aretha—she’s been doing that her whole life—but she told me that this would be the party to end all parties.”

After a few years of marriage, their relationship dynamic changed, with Turman reportedly feeling like he was playing second fiddle to Franklin’s superstar status.

“Her marriage to Glynn was billed as the perfect Hollywood relationship. A handsome, dashing, and successful actor marries a beautiful, glamorous, and successful singer,” Aretha’s sister, the late singer Erma Franklin said in the book.

“After her fairy tale wedding and her enormous effort to paint a perfect picture in all the magazines, the end of this relationship was especially painful.”

Turman and Franklin divorced in 1984 and continued their careers separately. Turman did visit Franklin at the hospital before her death.

“I went in, they said Glynn is here. She stirred. And we had a nice time together,” Turman told ABC7.