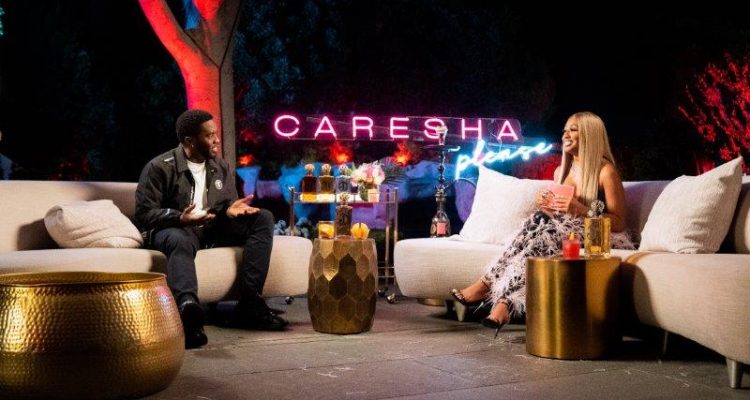 After not responding to the rumors of dating Yung Miami, music mogul Sean “Diddy” Combs finally confirmed publicly that he and the young rapper are an item.

During an interview on the premiere REVOLT show, Caresha Please, Diddy clarified his status with Caresha a.k.a Yung Miami, stating emphatically that they “have dates.”

Yung Miami, one-half of The City Girls group, debuted her show on Thursday. Combs, who founded Revolt back in 2013, his new boo’s first guest. Yung Miami didn’t mince words when she asserted that she and Diddy now “go together.”

“We go have dates. We’re friends. We go to exotic locations. We have great times.”

While mentioning that they also go to strip clubs, and even have an upcoming date to attend church together, Diddy still classifies himself as single and says he is “just taking my time at life.”

The two may just be a match made in mogul heaven after Diddy confessed to Yung Miami,

“You’re like one of the realest people I’ve ever met. You’re authentically yourself and you’re a great mother and a great friend. We just have a good time…yeah, you the funnest.”

The revelation of the relationship between the two emerged less than a month after an online exchange between Yung Miami and Diddy’s rumored other gal pal, Gina Huynh.

Huynh posted a photo of Combs kissing her on the cheek on her Instagram Live, which apparently set Yung Miami off.

Somebody please give this bitch some attention!

But that was just the beginning. Although a name was never mentioned, many assumed the rapper was directing her anger toward Huynh.

Notice me please ass bitch go sit down! WE SEE YOU RELAX IT’S ok! You been (AROUND) just (AROUND) for years! You been waiting on this moment if he can’t make you famous bitch I ain’t!

Huynh responded on her Instagram Live, “If anybody is seeking attention…B**CH ITS YOU.”

In a longer rant, Yung Miami said, “Notice me please ass bitch go sit down! WE SEE YOU RELAX IT’S ok! You been (AROUND) just (AROUND) for years! You been waiting on this moment if he can’t make you famous b**ch I ain’t!”

The catfight continued with Huynh hitting back at the Act Up rapper saying:

“Attention? B**ch I am the attention let’s be clear!”

Yung Miami however had more smoke to coat the catfight:

“Ian arguing with no b**ch that got cheap ass lint ball carpet in they house fucking on a billionaire! You freaky ass bitch!”

“why you so press mama… I thought you was a city girl,” Huynh hit back.

Yung Miami responded with, “I am and that’s why I f**k with yo n**ga & ain’t coming off him idc how many pics you post!”

In case you missed the first episode of the podcast, peep it here.