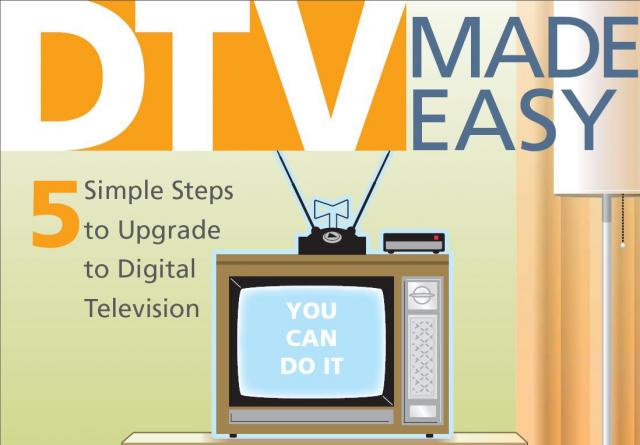 With under a day to go to the nationwide digital television (DTV) transition, consumers who have not already made the transition from analog TV will be left watching a blue screen come June 12.

Even though the screens will go blue, for those who haven’t made the transition, a toll-free number will appear on the screen where consumers can get help and request coupons to purchase a converter box. It will either be the 1-888-DTV-2009 for the Department of Commerce’s helpline or 1-888-CALL-FCC. (DTV Transition Guide | FAQs)

The switch will free up the airwaves for police, fire, and emergency rescue communications, and allow broadcasters to offer programming with better picture and sound quality and offer more programming choices, and allow for advanced wireless services for consumers.

Consumers who do not subscribe to pay television services and have older, analog televisions will need to attach digital-to-analog converter boxes to their TV sets in order to continue receiving over-the-air television programming beginning Friday.

The FCC is facing criticism over the transition. Joel Kelsey, a policy analyst for Consumers Union, said at a recent FCC hearing that he was concerned that cable operators were trying to use the transition to digital to have consumers buy expensive services that they don’t need.

Despite the government’s media campaign to alert consumers to the transition, there are still 2.8 million American households, or 2.5% of the television market, not ready for the transition, the Nielsen Co. reported. That represents about a 50% improvement in readiness levels since the decision was made in February to delay the DTV transition, according to the FCC.

Younger African American and Hispanic homes are disproportionately unready, while the elderly are the most ready. About 5.1% of African American households aren’t ready, which is about the twice the national average.

Households of under 30 that are also more unprepared than the national average. “Maybe it’s because they rely on new forms of media for news and programming and don’t care about television anymore,â€ quipped Secretary of Commerce Gary Locke at a press conference Wednesday.

Consumers should call 1-888-CALL-FCC for help in making the transition to digital. Or they can visit www.dtv.gov and enter their zip code or state in the upper right-hand corner of the page to find local events and walk-in centers where they can get assistance. By entering their ZIP code, they can also find station reception information that will help them to decide whether they need to adjust their antennas, or purchase a new antenna, in order to continue receiving their favorite stations.

“The FCC is offering free in-home installation for consumers in most cities,â€ said Locke. Consumers with technical questions about how to install the converter boxes can call the FCC at 1-888-CALL-FCC. The call center will be fully staffed for many days even after June 12, he said.