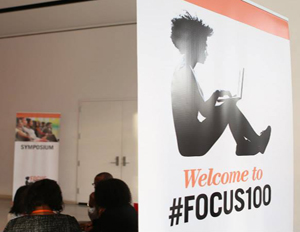 Digital Undivided isn’t waiting for permission to change the current tech landscape, which is largely (and unapologetically) young, white and male. In fact, Kathryn Finney, managing director at Digital Undivided, mobilized to flip the script, creating the FOCUS 100 technology conference which brings together tech companies with black women founders/co-founders, angel and venture investors, leading corporations and those invested in the future of tech.

“This is not an event where we come to talk about why we’re not there,â€ said Finney to BlackEnterprise.com. “We all know we’re not there…but this is really a conference about okay, now what do we do? What’s next? What are the action steps?â€

Held at Ogilvy Worldwide headquarters in New York City, the three-day annual event (October 4-6), provided attendees with keynote addresses from Stacy Brown Philpot, COO at Taskrabbit, Issa Rae, CEO and owner of Issa Rae Productions, and legendary rapper and early tech adopter MC Hammer. Both the bootcamp and symposium ignited honest conversations on funding, pitching and developing new entrepreneurial opportunities with panelists such as Lauren Maillian Bias, general partner at Gen Y Capital, Majora Carter, president at Majora Carter Group, Heather Hiles, CEO and founder at Pathbrite, and President at Maximum Leverage Solutions Navarrow Wright. At the inaugural FOCUS100 conference, participants were introduced to four pitch finalists: Marlo Rencher, founder of Good Sweat, Rachel Brooks, founder at Citizen Made, Zuhairah Scott Washington, founder of Kahnoodle and general manager at Uber, and Tioki founder Mandela Schmaucher Hodge. A year out, each founder discussed where they are today with their startups, as well as what they’ve learned since they took the stage.

Their final remarks provided the perfect segue into the Pitch-It session where the new class of startup founders was given a platform to showcase their business models. The 2013 FOCUS100 pitch finalists, which includes Nichelle McCall, founder of BOLD Guidance, Danielle Jones, founder of Lineapple, Blessings Oyeleye, founder of Makers Crew, and Tender Caring founder Nicole Sanchez, pitched to a group of angel, venture and institutional investors from 37 Angels, Comcast Ventures, Microsoft and Gen Y Capital Partners. Sanchez took first place, winning the opportunity to attend Tech Cocktails in Las Vegas, Nevada, and McCall won in the best mobile app category.

“This is awesome! Less than a year ago, I had a great corporate job and met Kathryn [Finney] at South by Southwest; now, less than a year later, I’m the winner of the FOCUS100 pitch competition,â€ said Sanchez, who was still in awe at her recent win.

The winning didn’t stop there. Sponsored by Google, the Global Hack allowed students, entrepreneurs and tech enthusiasts alike to code their way to the grand prize, which included $500, Nexus 7 tablets and Rasberry Pi systems. Graduate students Khalia Braswell, Aqueasha Martin and France Jackson, as well as Wanda Eugene, PhD, won the hackathon with an app that allows users to identify healthier ingredients for recipes and places them on a leader board where they will be ranked by others who also have the app.Â  The more points a recipe earns, the greater the reward.

Braswell sent out a celebratory message on Twitter after the win: “We won our first hackathon!!â€

Many of the attendees took to Twitter to share their insights from FOCUS 100. Last year, the conference generated 47 million impressions on Twitter and reached 3.7 million people. This year the tech conference was trending worldwide on Saturday on the popular microbloging site. Check out the Storify below to see what participants had to say about last weekend’s conference: