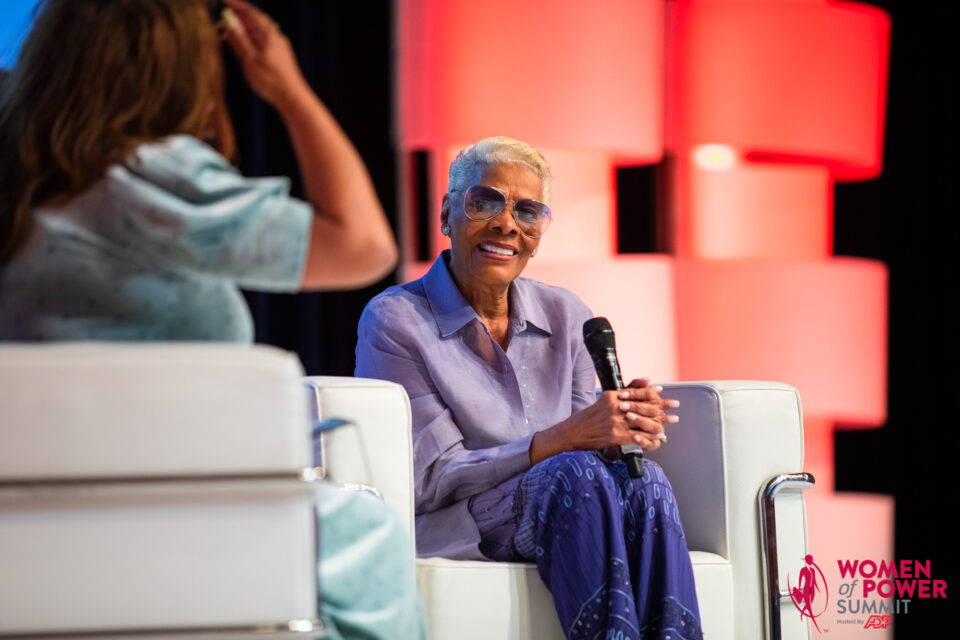 Dionne Warwick was honoredat the 2022 BE Women of Power Summit with the Legacy Award (Image: TylerTwins)

Limping a little and guided by BLACK ENTERPRISE CEO Earl “Butch” Graves Jr., the legendary “That’s What Friends Are” For crooner revealed that she fell and injured her leg but nothing was going to stop her from “coming to get my stuff,” meaning the Legacy Award that she was honored with.

Journalist Danyel Smith had the honor of interviewing Warwick and proved to be the perfect host.

Warwick exchanged banter with Smith, starting with explaining that she was supposed to be honored by BE a few years back but a sickness kept at bay. This time around, she was in Las Vegas to perform and was dead set on coming to the Women of Power Summit to share her wisdom and secure her award this go round.

Smith’s authentic love and admiration for Warwick’s music and career got the history-making singer to open up and share some of her life memories on growing up in Orange, NJ to the recording process behind some of her biggest hits.

Warwick recalled growing up in a diverse community in Orange, NJ that unconsciously set the tone for Warwick’s dedication to uniting people through her work. She revealed her initial plans to become a music teacher despite having already received widespread recognition singing with her sister and cousin as The Gospelaires.

After Warwick signed a recording contract in 1962, she recorded her first single “Don’t Make Me Over” and the rest was history. She shared how “humbling” it was to become the first Black woman to win a Grammy in 1968 for her hit “Do You Know the Way to San Jose”.

The “Heartbreaker” singer took the room for a trip down memory lane recalling her successful crossover success among R&B and pop audiences. In just eight years after signing her recording contract, Warwick had 30 hit singles under her belt, close to twenty best-selling albums, and received a second Grammy for her album I‘ll Never Fall In Love Again.

In addition to her success in music, Warwick has been a tireless activist having served as the U.S. ambassador of health for both the Ronald Reagan and George Bush administrations.

Using her 1985 hit single “That’s What Friends Are For,” Warwick partnered with the American Foundation for AIDS Research and raised over $3 million for that cause. She became one of the first major celebrities to join the fight in raising awareness of the AIDS epidemic.

At 81 years old, Warwick is still keeping herself moving with her interior design company with Bruce Garrick, WG Design Lab.

The trailblazing performer is set to open up even more in tell-all documentary feature Dionne Warwick: Don’t Make Me Over. The film will be one of the first major releases on CNN+ after its launch this spring.