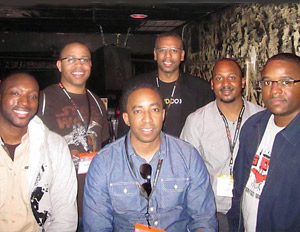 South by Southwest (SXSW), Austin, Texas’s annual music, film and technology conference which just wrapped this past Sunday, is known as the birthplace for some of the most innovative ideas in the world. The interactive portion of the conference is where Foursquare was founded and where Twitter took off.

Aside from acting as the jump off point for some of the world’s most popular tech companies, SXSW does in about five days what all of Silicon Valley can’t do in a year. They attract a crowd of web developers, software engineers, bloggers, and budding entrepreneurs that are relatively diverse in terms of race and gender and the conference provides a platform where others can take their work and opinions seriously.

Before you sing their praises too soon, they still have a long way to go. The overwhelming majority of the attendees, speakers, panelists and company owners at SXSW are white and male. But this year, black men and women made it a point to network with one another, participate in sessions, and some even pooled their resources to form a company, design a website, develop backend code, and seek venture capital in less than 48 hours while at the conference. That was the case for Wayne Sutton.

Before he left North Carolina to attend SXSW, Sutton, the business development strategist for TriOut, a location-based service in North Carolina, decided to form a Beluga Pod in order to keep in touch with other African Americans in technology who would be attending the conference. A Beluga Pod is a mobile app that allows you to share SMS text messages and photos to a private group of people. All members can read anyone’s updates to the pod. The pod that Sutton created grew to about 80 people as each member invited someone new to the group. Whenever Sutton went out to dinner, a panel session, or conference afterparty he updated the pod, which they named D@SXSW (the D stands for diversity) so that others in the group could decide whether or not to join him.

“It became a great tool for everybody to keep up with each other, promote their sessions, promote blacks in tech, what parties to go to, etc,â€ says Sutton.

One of the events that attracted Sutton and many others was “100% Viable, 1% Visible – Minority New Media Entrepreneurs” a solo presentation given by Kiratiana Freelon, a travel blogger and author of Kiratiana’s Travel Guide to Black Paris: Get Lost and Get Found. Kiratiana noticed that when it came to creating technology and entrepreneurship, African Americans and Latinos were missing the boat. She pitched SXSW on the idea of a panel to discuss the problem, but they had already started working on a similar idea and invited her to be one of the speakers.

Kiratiana, broke down results from CB Insights’ Human Capital Venture Report, which surveyed companies that had just secured their first round of venture capital funding (i.e. Series A funding). They found that of the 185 Internet startups receiving series A funding in the first half of 2010, only 1% were by African Americans, 87% were White American, and 12% Asian American. Latinos were not even broken out.

In addition, the report showed that companies started by African Americans were funded with $1 million compared to white companies who on average received $2 million and Asian led companies that received $4 million.

Despite the pessimistic stats, Freelon’s presentation wasn’t meant to rehash the problem. She countered that although black-owned tech companies are not as visible as others, they are still viable. She gave examples of techies like Sutton, and others who were pushing the envelope forward.

She also addressed solutions to help increase the chances that Blacks, Latinos, and others can implement. For example, Freelon encouraged minorities to take advantage of programs like Startup America, an initiative by Barack Obama’s Administration to increase entrepreneurship in high growth industries. The Small Business Administration has committed to a 2:1 match (up to $2 billion) of private sector investments in emerging sectors, in economically distressed areas, and for early stage companies.

After Freelon spoke, Sutton and six other members of the Beluga Pod met for dinner and began to discuss Kiratiana’s session, the lack of black entrepreneurs in the web technology space, and what they might be able to do to change the statistics.

Most of them had never met before in person, but they realized that they had the collective skills necessary to start a web-based company. They moved their brainstorming session from the restaurant to the hotel lobby, pulled out their laptops and stayed there until 6am pulling together the infrastructure for GoKit, an idea to put visually compelling media kits online. The next day they pitched the idea to venture capitalists, and though they did not receive funding, they did receive valuable feedback and are now entered in The Lean Startup Challenge sponsored by AppSumo, a company that offers discount deals on web tools.

GoKit was launched before SXSW ended, but others like Adria Richards, left the conference inspired to plant her own tech seeds. Richards, who conducts small business technology training through her company Freshworkshops, started UseYourDeals, a dashboard that sends an update when deals you’ve purchased are close to expiring. She also entered the Lean Startup Challenge.

For Richards, seeing Sutton and other African Americans team up helped her realize that the best tools at SXSW were the relationships people formed.