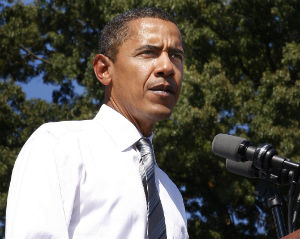 In the months prior to the presidential election in 2008, there was a growing sense that Barack Obama was going to become the first black President of the United States.

In addition to being a financial journalist, I was discovering my passion for making people financially literate, while working closely with John Hope BryantÂ and his massive financial literacy organization, Operation HOPE.

I, like other people at HOPE, noticed an increase in the number of people coming into HOPE’s financial empowerment centers to do things like learn how to start a business, get a mortgage, and get financial counseling. It was clear that, on some level, the possibility of a Barack Obama presidency made a lot of people feel like they had a champion, and they hadn’t felt that way before. It was clear that this man had inspired people to be their own financial activists.

“Hope can be contagious, too. Hope can and often has been the most important tipping point for society. But hope needs a fuse; something that trips it, something that makes it okay for people to feel and believe again. And, when that happens, positive contagion spreads again,” says Bryant.

Despite our socioeconomic challenges, the racism and discrimination that has put so many of our brothers and sisters at the bottom of the wealth gap, according to Nielsen Research, black households earning more than $75,000 are the fastest growing income group in the country.

However, we won’t truly level the economic playing field for all people of color until we vote for those who will enact social policies that level the economic playing field and internally create the psychological and emotional foundation we need in order to attain true wealth. Key questions must become, “What do I see people like me doing, when it comes to money?â€ “What do I see people like me not doing?â€ “What are the influences that are playing out in my own behavior?â€ “What would I be doing differently, if I were living my ideal relationship with money?”

We must overcome our reservations about the financial services industry and seek out those professionals and organizations that are invested in the economic success of our community.

“Yes we can,â€ turn the tides on our economic circumstance as a group, but it starts by making a connection and commitment to put the “content of our characterâ€ on display in our personal financial choices.