Does Rajon Rondo Have a Future as an NBA Coach? 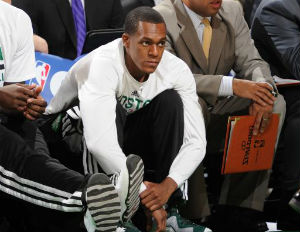 When will Rajon Rondo be back for the Boston Celtics?

Rajon Rondo isn’t back from a torn ACL yet, but he’ll certainly have his options once he retires.

The subject of him becoming a coach one day recently came up with reporters.

“I have a long way to go,â€ Rondo said, according to the Boston Globe. “And obviously I want to play for another 10 or 11 years. But it is something that’s in the back in my mind. And it starts now. I think the process is starting now.”

Rondo will come back from his injury sometime in the beginning of January, coach Brad Stevens said. He was recently medically cleared for full-contact practice.

Rondo said it could be a natural evolution for him, piggybacking on teammate and fellow guard Courtney Lee’s comments over the weekend: “Rondo, it’s like he sees the play before it happens.â€

“I think it just comes natural, with me being so vocal on the court, knowing everything out there on the court – what’s going on, play-calling, guys who have it, guys who don’t have it,â€ Rondo said.

Rondo added that he learned a lot from his former coach, Doc Rivers. He has also been vocal about his respect for current coach Brad Stevens.

5 Reasons Why You Need Life Insurance