The Possible Punishments for Donald Sterling 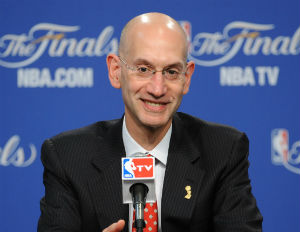 For years the NBA seemingly turned a blind eye to what can be described as troubling behavior exhibited by Clippers owner, Donald Sterling.

There was the lawsuit against Sterling by former Clippers general manager, Elgin Baylor. In that suit which was ultimately rejected by a jury, Baylor claimed that Sterling had a quote, “Plantation mentality.” There were all the complaints by former Clippers star, Baron Davis. There was even a $2 million plus settlement with the department of Justice over housing-discrimination charges.

Former NBA commissioner David Stern preferred to look the other way, at least as far was we know, in the hopes that Sterling wouldn’t do anything major to embarrass the NBA or its financial interests.

Well that day finally came this weekend, when an audio recording of conversations between a man alleged to be Sterling and a young woman was loaded with some of the most disturbing racist comments from a major league sports owner to enter the national narrative.

It’s now up to Adam Silver, the new NBA commissioner, just three months into a new regime to bring the hammer down.

The question is what can Silver do? There is a fine line between the right thing to do and the legal thing to do. There are a myriad possibilities though as to how the league can and will throw the book at Donald Sterling.

Silver will more than likely look to the “conduct detrimental to the league” clause where a suspension and a fine could be a likely outcome. Forcing Sterling to sell or give up the team is a difficult scenario and one that will likely come with its fair share of legal battles. Remember, the commissioner is a steward of the league, and while his power is considerable, he still works for the owners and the owners are understandably careful about how much power they want to give away.

Speaking in the locker room Monday before the game between the San Antonio Spurs and the Dallas Mavericks, Mark Cuban, the outspoken owner of the Mavs says though he trusts Silver to act in the best interests of the NBA, it was a “slippery slope” to suggest that Sterling should be forced out as owner over comments he allegedly made in the privacy of his home.

“What Donald said was wrong. It was abhorrent,” Cuban said. “There’s no place for racism in the NBA, any business I’m associated with. But at the same time, that’s a decision I make. I think you’ve got to be very, very careful when you start making blanket statements about what people say and think, as opposed to what they do. It’s a very, very slippery slope.”

This applies to an owner who “makes a statement having or designed to have an effect prejudicial or detrimental to the best interests of basketball.â€ Steinberg says he believes Silver could declare Sterling’s statements so outrageous that he could invoke Paragraph 24 penalties.

Under the terms of Paragraph 13 of the constitution, NBA owners also have the right, by three-fourths vote, to revoke ownership if an owner “fails to fulfillâ€ a “contractual obligationâ€ in “such a way as to affect the [NBA] or its members adversely.â€

Finding the right solution and proper punishment for Donald Sterling is now a worldwide issue that has dominated television, radio and Internet discussion. The NBA and its brand are under assault. It is no longer simply a black and white issue. Gray areas abound. President Obama has also weighed in. The outrage and condemnation is global.

It is the commissioner’s duty to protect that brand. Today is the defining moment for Adam Silver. The ball is in his court at 2pm Tuesday.