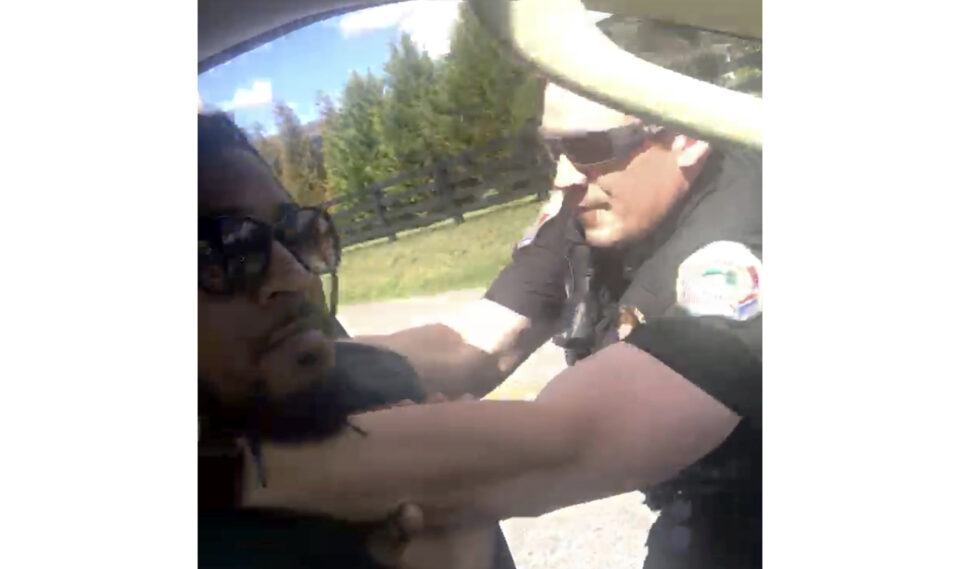 In this image made from video provided by Delane Gordon, a police officer in Collegedale, Tenn., is seen before he fires a stun gun at Gordon on Thursday, March 10, 2022. Gordon, a food delivery driver, began recording his traffic stop for speeding and asked to see the officer’s supervisor. Gordon’s attorney, Ryan Wheeler, says Gordon is facing additional charges of resisting arrest and obstruction of justice. Police have so far not identified the officer. (Delane Gordon via AP)

Delane Gordon, a Black DoorDash driver who was pulled over for speeding, was tased after asking a Collegedale, Tennessee police officer to speak to his supervisor.

The Washington Post reports Gordon was making a delivery on Mar. 10 when a police officer passed him, pulled a U-turn and pulled Gordon over for speeding. A video of the incident taken by Gordon showed him politely asking to speak to the officer’s supervisor, but the situation escalated when the officer demanded Gordon get out of the car.

“Please get your supervisor.”

The officer, who has not been identified, then attempted to pull Gordon out of the car before pulling out his Taser and moments later used it on the delivery driver, who screamed in pain. Gordon’s attorney, Ryan Wheeler, released the video Friday in order “to spark conversation in the community” and “raise awareness” on how police interactions escalate too quickly, largely due to the officer.

Wheeler added that his client was unarmed during the incident and was charged with resisting arrest and obstruction of justice. According to Fox 17, the Hamilton County District Attorney’s Office requested the county sheriff’s office to investigate a Mar. 10 traffic stop by the Collegedale Police Department, involving the same charges Gordon is facing.

The Collegedale police said they are fully cooperating with the sheriff’s investigation and will conduct its own investigation.

“We anticipate a release of the full body camera video and Internal Affairs report, as soon as those investigations are closed,” Lt. Jamie Heath of the Collegedale Police Department told the Washington Post in an email.

The incident comes as interactions between police officers and Black men and women continue to be contentious even after the Black Lives Matter movement.

Recent examples include Jajuan Henderson, who was grabbing iced tea from a family member’s car in February when he was shot and paralyzed by Trenton police. The family of Kevin Johnson, who was shot and killed by a San Antonio officer earlier this month, has been calling for the release of the body camera footage.