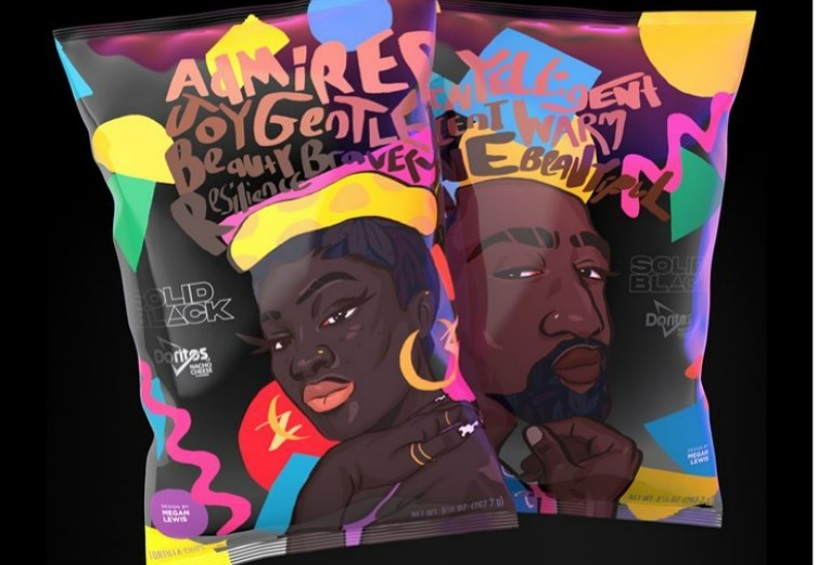 Megan Lewis — who is an award-winning artist from Baltimore — designed a limited-edition Doritos SOLID BLACK™ bag.

Doritos picked a Black artist to create limited-edition Dorito bags and the snack brand is also helping Black creatives and innovators through a new campaign.

Doritos is amplifying the voices of more Black creatives and innovators who are seven members of Doritos SOLID BLACK’s Inaugural Class of 2021.

Lewis was previously “featured in Doritos 2020 #AmplifyBlackVoices campaign where she painted a “Protect Blk Women ” mural in response to the killing of Breonna Taylor,” according to WUSA 9.

“They gave me the words resilience, bravery, joy and strength,” Lewis said in WUSA 9’s interview. “I took those words and created the work that you see on the bag. Not only are Black women resilient but we are soft and gentle. We are all of these things.”

Doritos also announced that it is launching SOLID BLACK™ — which is “a new multi-platform initiative backed backed by action and funding designed to bolster the voices of Black innovators and creators”— to provide resources for them “to continue driving change.” Per the press release, the company committed to investing over $5 in the SOLID BLACK™ campaign. The snack maker is striving to “amplify stories of Black joy, strength, and resilience.”

Doritos announced that the first 1,000 individuals who make a $10 or more donation to National Urban League will receive this limited-edition bag. Raised funds will be used to “support minority-owned businesses.” Doritos committed to making a $100,000 donation to the National Urban League, but the company is presenting a call to action for fans to get involved through the SOLID BLACK™ campaign, according to the announcement.

As stated in the announcement, the inaugural class’ stories will be highlighted on Doritos’ public channels and in advertisements and receive $50,000 to help continue their change-making work.

“Doritos has long been a brand that believes in igniting and championing bold self-expression and authenticity,” Stacy Taffet, vice president of marketing, Frito-Lay North America, said in the announcement. “We are proud to provide a platform and resources to innovators and creators who are making a lasting impact on culture and hope that their stories can inspire the next generation in the continued effort to create a more equal and diverse world.”