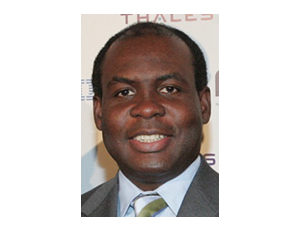 Dr. Ashitey Trebi-Ollenu is one of the esteemed academics and scientists who will participate in Black Enterprise‘s upcoming TechConneXt Tech Summit. Dr. Trebi-Ollenu designs robots for NASA and is regarded as one of the leading roboticists in the world. He currently is the product delivery manager for the InSight Mars Mission Instrument Deployment System as the Instrument Deployment System Operations team chief, and he is a technical group lead in the Robotic Manipulation and Sampling group at NASA Jet Propulsion Laboratory, at the California Institute of Technology.

Dr. Trebi-Ollenu was involved in developing, operating, and building the robotic missions for Mars exploration, including the Curiosity Rover, Phoenix Mars Lander, and MER missions.

Born in Ghana, Dr. Treni-Ollenu has a Ph.D. in Control Systems Engineering, from the School of Engineering and Applied Science, Royal Military College Science, as well as aÂ  B.E.ng. in Avionics from the Department of Aeronautical Engineering, at London’s Queen Mary College.

In 2008, Dr. Trebi-Ollennu received the NASA Exceptional Engineering Achievement Medal. This is awarded to those who have made unusually significant engineering contributions towards achievement of aeronautical or space exploration goals. His other awards and honors include the 2007 Outstanding Engineer Award from IEEE Region 6; the 2007 Sir Monty Finniston Achievement Medal from Institution of Engineering and Technology; the U.K. 2010 Specialist Silver Award from the Royal Aeronautical Society; and The 21st Century Trailblazer Award in Systems Engineering from the U.S.A. National Society of Black Engineers, at the 2012 NSBE Aerospace Systems Conference.

Dr. Trebi-Ollenu will be part of a distinguished panel discussing advancements and opportunities in the fields of artificial intelligence and robotics at TechConneXt.