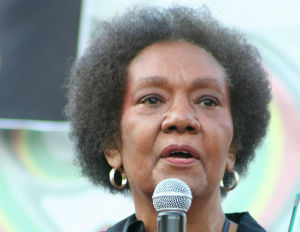 Dr. Frances Cress Welsing, a lauded author, researcher, and psychiatrist, has died, according to reports. She was 80.

Welsing is best known for composing The Isis Papers: The Keys to the Colors, and is the originator of the “melanin theoryâ€ and the “neurosesâ€ of white supremacy.

The Howard University graduate wrote essays and did extensive research on colorism, racism, and inequality, often exploring concepts of white supremacy in her works. Her research, done throughout the early 1970s into the 1990s, was controversial at the time, focusing on white racism while offering a theory of black pride and superiority based on levels of melanin.

In her 1970 essay, The Cress Theory of Color-Confrontation and Racism (White Supremacy),Â Welsing wrote, “The quality of whiteness is a genetic inadequacy or a relative deficiency or disease based upon the inability to produce the skin pigments of melanin which are responsible for all skin color,â€ adding, “The majority of the world’s people are not so afflicted, suggesting that the state of color is the norm for human beings and [its] absence is abnormal.â€

Welsing, born on March 18, 1935 in Chicago, Illinois received her Bachelor’s degree at Antioch College and her M.D. at Washington D.C.’s Howard University College of Medicine. She was an assistant professor of pediatrics at HU’s College of Medicine when her Cress Theory essay was published.

Welsing would later spend more than 20 years working as a staff physician for the Department of Human Services in Washington, D.C., and as the clinical director of two schools for emotionally troubled children. She was a specialist in child and general psychiatry, and she began her private practice in D.C. in 1967. She was a member of the National Medical Association, American Medical Association, and American Psychiatric Association.

“I put the discussion of melanin on the board in order to [describe how pigmentation] was a factor in what white supremacy behavior was all about,â€ Welsing noted in an interview with Michael Eric Dyson. “If I had my way, there wouldn’t be all the discussion about melanin. I would say, ‘Discuss white supremacy.’ â€

Her research was groundbreaking in opening modern-day dialogue about colorism and racism in America.

Ultimately Welsing believed that the key to eradicating racism lies in self-respect, discipline, and education. “We must clean up our neighborhoods,â€ she told Halliburton. “We must revolutionize ourselves … Whether white people are consciously or subconsciously aware of it, they are behaving in a manner to ensure white genetic survival. We must know this truth. And the truth is the first step toward real strength.â€