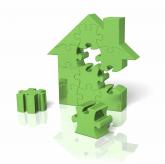 When Freeman Ledbetter was nearing the end of his post-doctorate program in neurochemistry at Duke University in 1976, he didn’t have his sights set on starting his own medical practice. Instead, Ledbetter envisioned a career in home development. To some it may have seemed a bit offbeat for someone who had spent eight years learning about the complexities of the brain and body, but to Ledbetter it was a reasonable choice.

“During my post-doctorate period, I came to the conclusion that the majority of the life-threatening diseases that we experience are pretty much preventable if we just clean up the environment in which we live,â€ Ledbetter says. “So, I thought that I would have a much more exciting time trying to figure out ways to prevent disease rather than trying to find cures, and that led me to thinking about what is now called ‘green’ building,â€ he says.

Of course at that time when Ledbetter was developing his concept, very few developers were building environmentally friendly, or solar, houses and the green movement had yet to get underway. But Ledbetter was determined to design and build spaces using natural materials that “our bodies are compatible withâ€ and that would help to save the environment. Although he had no architectural training or engineering experience, and had not even officially launched a business, the graduate student convinced some landowners in his hometown of Durham, North Carolina, that he was capable of helping them develop 32 acres of prime real estate.

“I had taken a real estate course, and had just gotten my license when I met these people while out one day riding my bicycle,â€ Ledbetter says. “One part of the land had already been subdivided by some other developer, but his contract had expired, which gave me an opportunity to move right in and begin to help the owners manage the sale of that [land]. I then worked out an agreement with them to develop the part of the land that wasn’t developed,â€ he says.

That agreement included Ledbetter raising the $250,000 needed to take on the project, designing the site plan–the installation of streets, water, and sewer lines, and all the infrastructure–and locating builders to construct the houses. Ledbetter secured a development loan from an area bank, hired a local structural engineer, and used subcontractors to begin building his solar houses. But unlike a lot of builders, this conservationist didn’t cut down many trees.

“The first thing that most mass builders do when they come in and take a piece of land is cut down all the trees and then try to adapt and reconfigure the land so they can get as many houses on that piece of land as possible,â€ he says. “Well, that disrupts the eco-system because it increases storm water runoff and causes a lot of flooding. So, what I do is take a lot and design a house to fit the lot so that I don’t disrupt the ecosystem