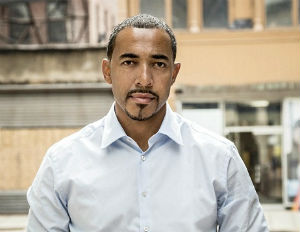 Famed emergency-room physician Sampson Davis knows how blessed he is to have survived the streets of Newark.

Sure, he’s a doctor and an award-winning author now but Davis’ childhood was riddled with tragedies and potential pitfalls: he hailed from an impoverished, single mother household in one of the most destitute communities in the country. He had an older sister who died of AIDS, a brother who was paralyzed in a bar fight and several friends who died as a result of street violence.

In his new book, “Living and Dying in Brick City,â€ the 40-year old also describes being 16 years old and, along with a friend, literally standing in front of a desperate man with a gun, who was threatening to kill them. Given how intently he’s stared down death Davis says he could think of nothing better than sharing all the ways he knows how to survive — and thrive.

This is why Davis’ first solo book (he co-wrote the New York Times-best-seller “The Pactâ€ with his childhood buddies Rameck Hunt and George Jenkins, about the agreement they made to one another to become doctors) addresses many of black youths’ biggest obstacles to success.

“‘Living and Dying in Brick City’ picks up where ‘The Pact’ left off,â€ says Davis on a break from the hospital.

“It’s part memoir and part a series of health and community-oriented stories designed to help us think through critical issues such as gun control, the rise in prescription drug abuse, the mental health crisis and silent killers such as heart disease, strokes, diabetes and obesity,â€ he says. “Also, sexually transmitted diseases, and the importance of mentorship — without which I would not be where I am today.â€

Davis, who mentors himself through The Three Doctors Foundation — which he runs with the help of Hunt and Jenkins — also discusses something else he knows a lot about as a doctor: how not enough black folks seek care before something is dreadfully wrong.

“In the book I talk about the lack of access to healthcare in our community, and how there’s still a mistrust a lot of patients have when it comes to the healthcare system,â€ he says.

A big chunk of the reason why is because we’re afraid of the folks wearing a white coat and a stethoscope.

“We need to increase the number of doctors that look like us, that talk like us and are from where we’re from as well,â€ he shares. “My hope is that the book will start a movement, a call to action where people are just a lot more concerned about their health.â€

After all, he advises, ObamaCare can only do so much.

“[Having insurance] is not necessarily going to change a person’s attitude about getting regular checkups,â€ he says. “Right now, in the emergency room I see a lot of primary-care issues — things that people should be going to their regular doctor for. It’s really important to find a primary-care doctor, make appointments and schedule follow-ups,â€ he insists. “If you have high blood pressure or diabetes, you have to stay in control of that. ObamaCare is going to make it easier for people not to be denied treatment for a health issue but at the same time they are responsible for doing their own due diligence and staying on top of the care they need.â€

Not that Davis wants you to think he’s preaching to you — he just wants his readers to live and live well.

“Medical books have been done in the past but this book is the first book to come from a person from the same community working at the same hospital he trained at,â€ he says. “It’s something everyone can understand because we’re speaking in very clear, concise terms. My goal is to get to a point where I have more of a platform to speak on issues like the ones that book addresses. There’s really not a voice out there that lends itself to health for our community in a major way. I’m hopeful that I can become that voice that’s just every day in our community.â€