Dr. Valencia Thomas Gives Pointers on How to Guard Against Melanoma 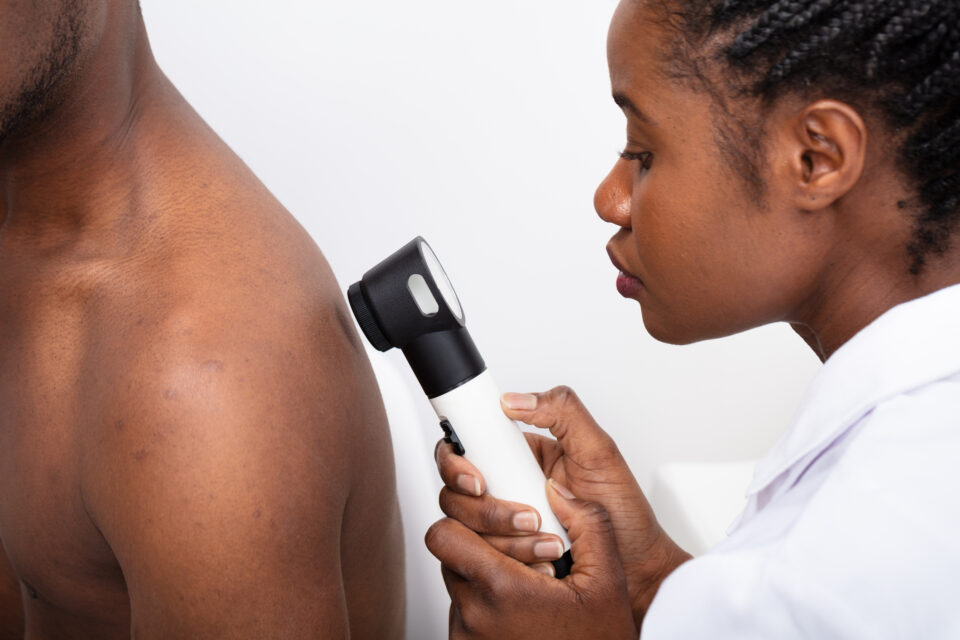 As the Black community continues to soak up the summer rays and collectively declare “we outside,” dermatologist Dr. Valencia Thomas, a professor of Dermatology at The University of Texas MD Anderson Cancer Center, wants to ensure the community is tending to the health of their skin while having fun.

Thomas’s interest in dermatology is rooted in her interest in clinical trials to study inflammatory diseases, observe traces of skin cancer, and treat cancer. She wants people to know how to keep their skin healthy and what to do to avoid illness.

“Although we know that in general, one in 77 people will develop melanoma over a lifetime with the average age of onset being about 51 years old,” she states.

One of her missions is to educate the Black community about the statistics. Black patients are three times more likely to contract melanoma at a later stage than non-Hispanic white patients. Thomas wants to educate about the factors contributing to the disease, how people can detect it earlier, and become aware of prevention techniques.

“The delay and diagnosis in patients of color, which include Latinx populations, African Americans, and Asians, have been thought to be multifactorial. Part of the delay comes from the fact that the patient doesn’t expect to look for skin cancers because of their skin color and that pigment in our skin is our natural sunscreen,” she imparts. She adds that many melanated people believe that since they may not endure sunburn, they are free to go without sunscreen to guard against the sun, resulting in many being unaware of the risks.

Thomas is mindful that many individuals may not know what to look for and how skin cancers appear. She advises that there are two categories: melanoma, potentially the most deadly cancer, and non-melanoma, which impacts a more significant number of people. However, since it is not as aggressive, people have a better outcome. Melanomas in the Black population tend to grow in the hands and feet, which do not correlate with sun exposure.

“For melanoma, that’s the one we talk about, the changing moles. These dark spots are essentially greater than the size of a pencil eraser. These are the A, B, C, and Ds of melanoma: A is for asymmetry, B is border irregularity, and C is for color; if you are looking at two colors colliding and one of them is dark, or they have multiple colors, or they have multiple colors that could be abnormal, D is diameter greater than a pencil eraser which is 6 millimeters, and E is evolution, these things that are changing,” explains Thomas who notes that is where melanoma show up on the skin of hands and feet, or elsewhere on the body and people should constantly check those areas. She also points out that Black, Asian, and Latinx populations will grow scaly, changing crusty moles and dry black spots similar to the growth on actor Morgan Freeman‘s face. Thomas emphasizes that what are considered moles on Freeman’s skin are benign lesion growth of the skin and are called dermatosis papulosa nigra that sometimes have small blackheads on top of them.

“Those are benign; we’re talking about something in the skin, sometimes it’s flat, and sometimes it becomes elevated. Those are the ones we are concerned about, in particular, Black and Asian present with melanoma; it is not uncommon for it to appear as a stripe in the nail,” she cautions.

“If it’s changing or getting wider or that stain starts to come onto the cuticle, that is abnormal behavior, and that needs to be checked.” The non-melanoma skin cancer, which is more common, usually appears as scaly, sometimes pearly. They can have a skin-colored or scaly bump and emerge as a wart.

“Usually, if you scratch it, it’s tender or bleeds. Those are signs you should come in and get it checked,” says Thomas.

She also encourages anyone showing these symptoms to get an evaluation from a dermatologist specializing in skin, hair, and nails.

“Certain medical professionals can perform biopsies in these areas, dermatologists do, and sometimes podiatrists will do a biopsy. If you don’t have a dermatologist, you can always go to your primary care provider who can [give] you a referral to a specialist that can evaluate the disease,” Thomas advises. According to the Skin Cancer Foundation, melanoma occurs in people of color, most often in areas with little sun exposure; up to 65 to 75 percent of tumors surface on the palms of the hands, soles of the feet, under the nail and in the nail area.

Based on Thomas’ recommendations, people of color should use the following methods to help guard themselves against the disease: regularly visiting their dermatologist yearly and wearing sunscreen. However, Thomas points out that skin cancer in Black and Asian populations is a spontaneous genetic mutation, and there is no active prevention to avoid this malady. For example, sometimes melanomas can appear in the retina, known as uveal melanoma or the rectum; rectal melanomas are most common in Black women. Yet, the factors that people can control to prevent most cancers are maintaining a healthy lifestyle by controlling their weight and diet, drinking plenty of water, avoiding smoking and marijuana, and heavy alcoholic drinking.

Thomas wants to convey to the Black American community that wearing sunscreen is imperative even when driving in their vehicles, especially for long road trips, because ultraviolet radiation can pass through the glass, age the skin, and cause cancer. She advises wearing hats, avoiding sunburns, taking a multivitamin supplement, and eating foods rich in vitamin D. She also recommends that individuals inspect their entire body once a month for any growths or abnormalities.