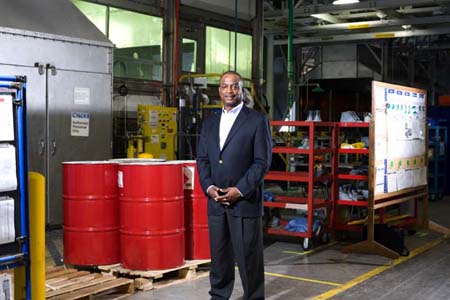 There’s little argument that Detroit is one of the cities hit hardest by the Great Recession–the city built around the same auto industry that saw two of the “Big Threeâ€ manufacturers spiral into bankruptcy. While the domestic automotive manufacturers jockey to reposition themselves to regain lost market share, Leon C. Richardson is looking to enter new markets.

Richardson, CEO of ChemicoMays L.L.C. (No. 100 on the BE Industrial/Service list with $25 million in revenues), attributes nearly 45% of company revenues to General Motors. Headquartered just a few miles from Detroit in Southfield, Michigan, Richardson maintains that ChemicoMays was spared the worst of the downturn in the auto industry. “We’re an indirect supplier, maintaining the facilities or the equipment or the chemicals. Even though GM had a downturn in production, we still had to maintain the physical facilities,â€ he says, “so that when they came back on line, we were prepared to go.â€

Still, there’s good reason to be concerned about that level of exposure to any one client, so the ChemicoMays team has drafted a diversification strategy. “Outside the [auto] industry, we just picked up a couple of new contracts. This time next year, GM won’t be our largest customer,â€ claims Richardson, 49. Indeed, the company has landed a multi-year, multimillion-dollar contract with Honeywell. “We’re looking at four other market segments to operate in–defense contractors, pharmaceutical, biotechnology, and aerospace–and we have a foothold in two of those markets today.â€

ChemicoMays is a too-rare example of an African American business partnership. Launched in 2006, the company is a joint venture between Chemico Systems Inc. (a manufacturer of specialty chemical products owned by Richardson) and the nation’s largest black-owned chemical supplier, Mays Chemical Co. Inc. (No. 25 on the BE Industrial/Service list with $183 million in revenues). ChemicoMays provides chemical management services–the ordering, application, storage, and disposal of chemicals ranging from cleansers to paint thinners, degreasers, machine coolants, and other solutions used in metalworking, assembly, and other manufacturing processes. Richardson sees a combination of geographical and industry diversity as the future of the business.

Black-on-Black Business
Richardson began his career 23 years ago as a laboratory technician at Product Sol, a Detroit-area chemical company that he later acquired. He eventually moved to the manufacturing side of the business and finally sales. A dispute with management over a commission check resulted in Richardson’s leaving the company and launching Chemico Systems. Richardson and Bill Mays, CEO of Mays Chemical, had known each other for several years prior to forming the partnership. Chemico Systems often purchased from Mays those chemicals it didn’t manufacture on its own.

That business arrangement helped pave the way for the alliance. “Bill Mays and I developed a great relationship as a result of a customer—supplier relationship. I saw the opportunity to expand using their infrastructure and backbone and our technical competence and efficiencies. Putting these two companies together, it was just a natural extension,â€ says Richardson. “Mays Chemical is a distributor, Chemico Systems is a manufacturer, and ChemicoMays is a management provider.â€

Since Mays Chemical had the staffing and resources, they would handle the back office functions: payables, collections, receivables. Financing, of course, was needed as well. Mays guaranteed a $2.5 million bank loan, which was paid off in four years. “The partnership has been nothing but positive. And if you can, in the course of four years or whatever, pay off a couple million dollars’ worth of debt, then that’s pretty significant,â€ says Mays, who owns just under 50% of the venture. “We’ve got significant business in other areas outside of the automotive area, which is what I wanted, and Leon got what he needed, which was some money.â€

This doesn’t come without its share of challenges. One of them is staffing. “You notice anything about my staff?â€ Richardson asks after a visit to one of the GM facilities ChemicoMays is contracted to service. “Not a single one of them is African American and it kills me.â€ Richardson, points to his cadre of chemists and chemical engineers–who are predominantly white–as a sad testament to the lack of African Americans in the sciences.
He’s worked with organizations such as the National Association of Black Suppliers to sponsor a $20,000 scholarship for African Americans looking to study chemical sciences at Wayne State University in Detroit and other major universities around the country.

Time to Venture Abroad
In its first three years, ChemicoMays generated enough revenues to be counted among the be 100s. Now it’s focusing on global markets. “We are a major supplier of chemical management services in Mexico. When you look at what’s happening with NAFTA and a lot of manufacturing moving into regions like Mexico and Brazil, it was just imperative that we look for a strategy that allowed us to go where our customers were going, and our first step was Mexico,â€ says Richardson. “We’re now looking further into South America and we’re shipping materials to China and Australia. We’ve been fortunate enough to move wherever our customers are moving on a global basis.â€

Contracts with biotech giant Amgen and Eaton Corp., a diversified power management company with 2010 sales of $13.7 billion, will help Richardson and his team reach their goal of growing the business outside of the automotive industry. “When you look at pharmaceutical and biotech firms, at the end of the day, what they create are blockbuster drugs and therapies,â€ says Richardson. “But, to develop those materials, they have to bring in a lot of different types and diverse chemistries to actually do the research, which leads to those blockbuster drugs.â€

But for now, automotive will continue to be the company’s bread and butter–with GM as its largest client. “We have a competitive bid process where we select suppliers based on our sourcing activity and we look at your quality, service, price and technology,â€ says Linda Ware, supplier diversity manager for General Motors, pointing out that the automaker has roughly 400 diverse suppliers. “ChemicoMays meets or exceeds all of those criteria.â€