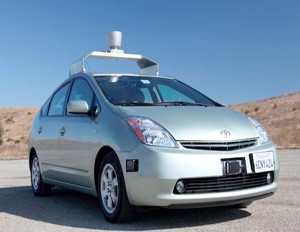 Arriving at Google in the passenger seat of a self-driving Toyota Prius–accompanied by Google co-founder Sergey Brin and State Sen. Alex Padilla, who sponsored the bill, Brown shared his belief in the future of these autonomous vehicles.

“Today we’re looking at science fiction becoming tomorrow’s reality – the self-drivingÂ car,” the governor said.â€ Anyone who gets inside aÂ carÂ and finds out theÂ carÂ is driving will be a little skittish, but they’ll get over it.”

Google’s tricked out cars depend on lasers, radar sensors and video cameras, as well as data manually collected from driven cars to assist with navigation, according to reports.

Brin says the automobiles will limit congestion, make the roads safer and provide a method of transportation for those who can’t drive themselves like the disabled, blind or elderly. “I think the self-drivingÂ carÂ can really dramatically improve the quality of life for everyone,” the co-founder said. Â He added, “I expect that self-drivingÂ carsÂ will be far safer than human-drivenÂ cars.â€

Not everyone agrees with the state’s recent legislative move. The Alliance of Automobile Manufacturers is troubled by the decision. “Unfortunately this legislation lacks any provision protecting an automaker whoseÂ carÂ is converted to an autonomous operation vehicle without the consent or even knowledge of that auto manufacturer,” the trade group said in a statement.

Although the new law goes into effect next year, industry officials say it will take years before a completely self-driving vehicle will hit the road.

While Google’s fleet of computer-controlled automobiles has recorded over 300,000 miles of self-driving with no incidents, the company has no plans to build its own driverless vehicles.

How would driverless vehicles impact your life? Let us know what you think in the comments section.