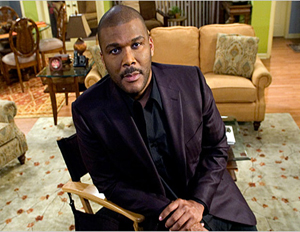 Tyler TV may be coming to a television set near you (Image: Getty)

This past Sunday, Tyler Perry posted a lengthy status update on his Facebook fan page (Why doesn’t he have an actual blog?) explaining a recent run-in with the police where the filmmaker/entrepreneur says he was harassed and feared things could take a “turn for the worse.â€ The incident occurred as Perry was leaving his movie studio and, as a security measure to prevent being followed, he made a left turn from the right lane and was subsequently pulled over for the illegal driving infraction. By his account, the simple traffic stop spiraled into scary waters after the police officers, who both happened to be White, thought something was “wrongâ€ with Perry for thinking someone was following him.

As one of the richest people in America (regardless of color) with an estimated net worth of $350 million, Perry has every right to be concerned with being followed. However, I can understand how making such a claim could appear “crazyâ€ to someone who’s unaware of the movie mogul’s status–as was the case here. Still, the officers’ actions, according to Perry’s depiction, appear to have been extreme and exaggerated, but that doesn’t negate the fact that Perry was in the wrong.

From his own admission, Perry made an illegal turn that caused him to be pulled over. As most people of color can attest to, being approached by an officer of the law in such a situation can be nerve racking, regardless of whether you’ve done something or not. We’ve heard too many stories of overzealous patrolmen roughing up or opening fire on a driver during a routine traffic stop.

Perry’s second err of judgment was not properly explaining himself. I’m not saying that he should have tried to use his celebrity to get out of a ticket he deserved, but simply saying you thought you were being followed without context does look suspect. According to Perry, though, the officers continually badgered him with questions without offering him the opportunity to respond in depth.

His third err was losing his cool and blurting, “I think you guys need to just write the ticket and do whatever you need to do.â€ While I understand Perry’s frustration and wanting to get the ordeal over with, driving while Black requires much more tact. It’s sad to say, but the advice his mother gave him about dealing with the police still rings true today.

My mother would always say to me, “If you get stopped by the police, especially if they are White policemen, you say, ‘Yes, sir,’ and ‘No, sir,’ and if they want to take you in, you go with them. Don’t resist, you hear me? Don’t make any quick moves, don’t run, you just go.â€

I can relate to Perry’s mother’s perspective. I’m not sure when I picked up this survival skill, but as a Black man in America I follow suit religiously. Back in my college years, a group of friends and I were driving two cars deep on our way back to Queens from a pool hall in Long Island. I was behind the wheel of my mother’s car, a beat up Cutlass Supreme, following my friends who were leading the way in the vehicle in front of me.

As we approached this one intersection, I noticed a police car creeping up beside me and rather than pulling up to the walkway, the officer left his car parallel to mine. I could feel his eyes peering into my car, but I knew I wasn’t doing anything wrong so I paid him no mind. Still, I couldn’t help but feel tense at the fact that this man with a gun was staring at me.