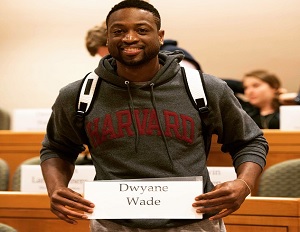 NBA superstar Dwyane Wade may be out of the NBA finals this year, but that doesn’t mean the athlete isn’t staying busy.

In addition to serving as an ESPN analyst during the finals, Wade found time to enroll in a class at Harvard Business School last week, studying graduate-level business theories.

“To come here and get away from being the athlete, the star, the superstar, whatever they want to call you and to be someone who had to study until 2, 2:30 at night and be up the next day by 8 in the morning for a study group, that is cool — especially right now with what’s out there,” Wade said in a phone interview with ESPN.

Currently, Wade has a few tough business decisions to make in regards to his basketball career with Miami Heat. He is under a $16.1 million contract for the 2015-2016 season, with the option to opt out and become a free agent July 1. While negotiating a new contract deal with Miami or another team is on Wade’s radar, the NBA veteran makes it clear that his decision to attend Harvard has nothing to do with the upcoming career decision he will have to make.

“This had been on my schedule for months,” he tells ESPN.

Wade learned about the class from NFL player Brandon Marshall, who took the course last year after contacting Harvard faculty chair and business administration professor, Anita Elberse, following his reading of a book she wrote.

The class, which cost around $8,000, is mostly geared towards senior executives and Wade had to go through the same application and selection process as all the other program candidates. Providing case studies on the likes of Real Madrid, BeyoncÃ©, Jay Z and even Wade’s former teammate LeBron James, the goal of “The Business of Entertainment, Media and Sports” course is to urge students to understand the strategies that are being used in those fields of business and see if they fit their own particular situations.

“For me, it’s about what’s next,” said Wade. “I had people say, ‘Wow, what are you doing here?’ They didn’t know what excites me, how I am, how I thirst for knowledge. So for me, it’s about taking what we learned here and see how it fits into what’s next.”