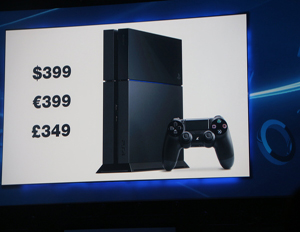 Sony spent a good deal of their Electronic Entertainment Expo 2013 press conference discussing their existing platforms. The tech company revealed that both Vita and PlayStation 3 will see several new titles launch before the end of the year such as 400 Days, the next entry in The Walking Dead game series, fan favorite Gran Turismo 6, which features a whole new rendering engine, and the highly anticipated Batman: Arkham Origins.

PlayStation loyalists in attendance were very excited over these titles, and they showed it in their constant applause, but most attendees came to see what Sony has in store for PlayStation 4, since the company’s New York launch in February. Before unveiling images of the PS4 to a thunderous applause, president and CEO of Sony Computer Entertainment Andrew House started the PS4 portion of the show with very bold exclamations, stating “we have a console of unparalleled power,” and “system architecture is capable of handling anything our developers can conceive.”

Sony hopes to back up these bold statements with what seems to be a three-pronged entertainment plan, indie and major games, and a price that is $100 lower than the new Xbox One by rival Microsoft Corp.

That’s right, when it arrives in stores during the holiday season, the PS4 will retail for $399 in the U.S. If that wasn’t enough to make Microsoft hot under the collar, they also announced that users would have the ability to play and share used games, as well as play games offline without authentication. These are two issues that many consumers have complained about that the Xbox One does not support.

Sony also unveiled a partnership with the film and music companies within the corporation. They will be leveraging their music and film divisions to further develop the PlayStation Network by offering Music Unlimited (20 million songs for stream across platforms) and Video Unlimited (150,000 movies for rent and download).

Sony has long been a company that supports indie game studios. In addition to seven exclusive titles from independent game developers, they also unveiled world premiere gameplay for two very big, exclusive titles. The standout Final Fantasy XV and Activision and Bungie’s Destiny will both be available in 2014.

It’s clear that Sony has not abandoned its bread and butter, the hardcore gamer. However, with a lower price point and gamer-friendly rules for used games, they’re actively going after the top console crown they held for many years.