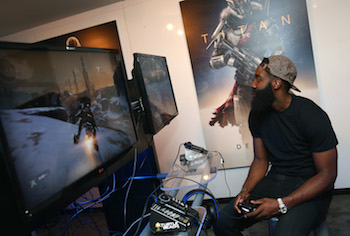 If you’re missing out on all the Electronic Entertainment Expo excitement (try saying that three times fast), the video game industry’s annual trade show was mired with tons of energy.

With the big three (Nintendo, Microsoft, Sony) all having stellar presentations, the hype turned to the games and getting hands-on time with the next-gen titles. E3, full of superstars and gaming developers, had the distinction of hosting NBA talent James Harden (Houston Rockets) and Bradley Beal (Washington Wizards) as they navigated the showroom floor.

Both are professed gamers with a love for first-person titles, so E3 invited the duo to be one of the primary players to try Bungie Games’ “Destiny” and Activision’s “Call Of Duty: Advanced Warfare.” The Wizards two-guard arrived first to play COD alongside the next-gen military fighter, and got hands time with both aforementioned titles, as well as “Skylanders Trap Team.”

The Rockets’ explosive two-guard joined Snoop Dogg (formerly Snoop Lion) as the two sent their selfies into outer space. The duo celebrated alongside Bungie as E3 2014 became the place where broadcasting yourself into an unknown galaxy was appreciated from Mars to beyond.

With the expo winding down, there are countless #DestinySelfies floating around on the web. And as the dynamic duo of Harden and Beal continue to champion the next-gen offering from Bungie and Activision, we have photo highlights of their time with “Call Of Duty: Advanced Warfare” and “Destiny,” respectively, as well as a trailer for your viewing pleasure.