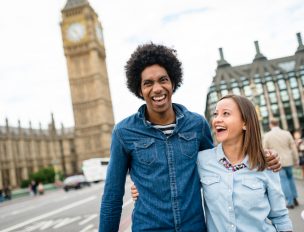 My kids are now 26 and 24, but sometimes, I wish they were younger. If so, we’d still be looking at college options, and I would definitely steer them toward going to school abroad.

I’m not sure how it happened, but last year, I became a subscriber to the email list of Beyond the States, a U.S.-based international college adviser and enthusiastic promoter of overseas study. I’ve benefited from reading its newsy, informative emails. The only problem? My kids were already too old.

Though attending an international college isn’t for everyone–my neighbor’s daughter, now attending school in the U.K., says she misses the New England school she transferred from, which she had previously hated–I think it’s an important option that every American family should at least consider.

That’s right. There’s a big world out there. You don’t have to limit yourself to the schools within our borders. Don’t speak German? That’s OK. There are plenty of English-language programs even in countries where English isn’t the native language.

To learn more, here’s an excerpt from a New York Times article:

“There was a time when the self-confident undergraduate took a semester or two abroad to taste an unfamiliar culture and dip a toe into the waters of higher education on a foreign shore. Today, tasting is timid stuff.

While graduate programs have long attracted international students, undergraduates are seizing upon the vast opportunities to enroll in foreign colleges for a complete bachelor’s degree. The number of options to do so is growing by the year. The online platform StudyPortals reports an estimated 5,670 English-language degrees in non-Anglophone countries. In Europe alone, 300 colleges and universities offer more than 1,500 English-taught bachelor’s degrees, according to Beyond the States, an international college adviser.

The benefits of a thoroughly international education in the age of globalization are conspicuous. But the game-changer is that college abroad can save parents tens of thousands of dollars. In many countries, including Turkey, Thailand, Brazil, Iceland, and some in continental Europe, college is either free or virtually so, with tuition less than a couple of thousand dollars. Many other universities offer a bachelor’s degree for under $7,000 a year.

Icing on the cake: It’s possible to obtain financial aid, both need- and merit-based, from universities outside the United States, as well as government aid from home. (The Department of Education website lists nearly 900 foreign colleges and universities where Americans can use federal financial aid.)”

Also, to get the list of nearly 900 foreign colleges where you can use federal financial aid, click on the link International Schools That Participate in the Federal Student Loan ProgramsÂ and open the Excel document.