ESPN and Earvin “Magic” Johnson together announced Thursday he would no longer be part of the network’s NBA coverage due to his other commitments. It’s major news for ESPN, which gained a ton of traction for its NBA Countdown show, which featured Johnson, Michael Wilbon, Jalen Rose and Bill Simmons.

“We appreciate Magic’s contributions and wish him well in his future endeavors,â€ John Wildhack, ESPN Executive Vice President, Production said in a statement. “We are in the process of determining our NBA commentator roles for the upcoming season.â€

With its revamped set up, ESPN had tried to nip at the feet of Turner Sports and its Emmy-award winning Inside the NBA broadcast, a nothing-short-of-magical combination of Kenny Smith, Charles Barkley, Shaquille O’Neal and host Ernie Johnson. After a season of ups and downs, the show no longer features Wilbon and Johnson.

“Unfortunately, due to the nature of my schedule and other commitments, I don’t feel confident that I can continue to devote the time needed to thrive in my role. I will always feel a strong connection to the ESPN family and I enjoyed working with them very much.â€

Johnson roundly praised Wilbon upon news that Wilbon, co-star of ESPN’s Pardon the Interruption, would no longer be a part of the show. It’s perhaps telling that he also included Wilbon in his word of thanks. 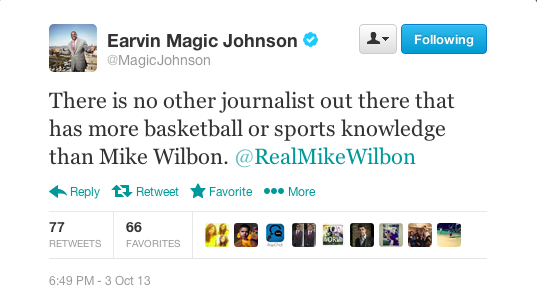 Media critics have already begun to question whether Wilbon’s departure had something to do with Johnson’s decision, citing that his various commitments had never been an issue before. Sports Illustrated has already reported that the very talented Doris Burke would join the broadcast on select Wednesdays.

“Honestly, we are a work in progress,â€ said coordinating producer Amina Hussein in 2012. “We put ourselves in a tough position by not knowing all of our talent until October, but I’m happy with the foundation. It’s a really smart group of analysts with great minds for the game of basketball. I compare them to any good team – we have the pieces, now we just need more reps. I’m excited to watch the show evolve.”

It will have to evolve without Johnson, its main source of star power. “Like all of the great point guards,” Hussein said in November of 2012, “he is a leader and is not afraid to speak his mind.â€