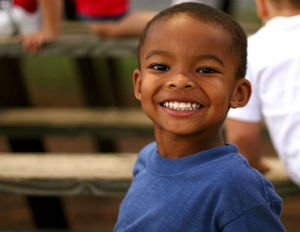 The Hamilton Project examines the long-term beneficial effects of interventions during preschool and up to third grade.Â

[Related: How Much Should You Spend on College and Student Loans?]

Furthermore, the income achievement gap remains as the child advances through school. The persistence of these gaps suggests that intervening early in life may have lasting benefits, and that a number of early life interventions, as shown by figure 12 below, may help children to develop the foundational cognitive and emotional skills needed to successfully reach later milestones, such as high school graduation.

Three programs focused on preschool-aged children have substantially improved high school graduation rates, especially among students at greater risk of dropping out. Head Start, the federally funded program targeting poor children between the ages of 3 and 5 with preschool, health, and social services, increased high school graduation rates among recipients by up to 20 percentage points, depending on the cohort and demographic group studied.

Head Start particularly benefited black and Hispanic males, increasing their high school graduation rates by 5.5 and 18.1 percentage points, respectively. Furthermore, it is estimated that the Perry Preschool intervention, which provided high-quality preschool to black children, had positive effects on a number of outcomes, including increased earnings and lower rates of crime among participants. Preschool attendees graduated from high school at rates 20 percentage points higher than non-attendees.

In addition, early-life interventions outside of school settings have been shown to increase high school graduation rates. Recent work on cohorts born in the 1960s and 1970s has shown that access to the Food Stamp Program from the time of a child’s conception through age 5 increased high school graduation rates by 18 percentage points. The success of these childhood programs points to the lasting benefits of intervening well before students enter high school.

Bottom line: Early childhood settings matter, so be very picky about who cares for your child while you’re at work. 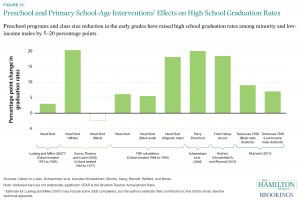