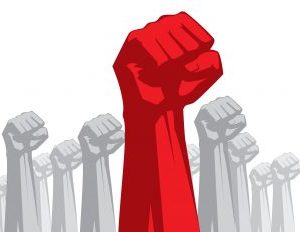 White women were accused of selling out the sisterhood. Trump tried to pit straight white men against everyone else–women, people of color, people in the LGBTQ community, immigrants–and white women decided they wanted to vote on the side of white men, said Slate associate editor L.V. Anderson in a column she wrote. She went on say, “Most white women still identify more with white men than they do with black women, Latina women, Muslim women, transwomen, and every other woman.â€ Women did vote overwhelmingly to elect Clinton, except for white women, reported the Edison national election poll.

In the column “Dear Fellow White Women: We F**ked This Up,â€ Sarah Ruiz-Grossman, associate editor for Impact at The Huffington Post, wrote that white women failed to show up to the polls to elect the first woman president–a white lady no less. She wrote, “Tell me we came through for our sisters of color, I begged, at least this one time. We didn’t. So, I am ashamed. I am ashamed of my country. I am ashamed of white people.â€ But more than anyone else, I am ashamed of white women. Is this who we really are? Clearly–and it is who we have always been.â€

Indeed, white Christian Americans–men and women–showed their true colors at the polls and Trump the billionaire businessman is America’s president. We don’t need anyone’s guilt or apologies. We need strategic alliances and collective bargaining power.

Now is the time for those of us viewed as outsiders to not only raise our collective voices but to exercise our financial muscle. Research suggests that communities’ generational economic empowerment is linked to entrepreneurial success. Therefore, if we want to improve our communities and provide jobs for each other we must advance and strengthen businesses. This means taking advantage of rewards based crowdfunding and also the JOBS Act signed by President Obama in 2012 to invest in startups by founders who are people of color, LGBT or Muslim–those groups who continue to have limited access to capital. On May 16, 2016, Title III of the JOBSÂ Act, also known as equity crowdfunding, was the last sectionÂ to be implemented by the SEC, allowing people who don’t have massive wealth to help fund new businesses. Statistics show that white male angel investors and venture capitalists continue to fund founders who look like them. African Americans, Latinos, and people of Middle Eastern descent get less than 20% of investment dollars.

As multicultural consumers, we are becoming the core of the U.S. population. African American, Asian American, and Hispanic consumers account for more than 120 million people combined (38% of the total population). Black buying power is $1.3 trillion. Hispanic spending power is $1.5 trillion. What’s more, LGBT consumers shop more frequently with a combined buying power of $917 billion. While spending power does not equate to income, as a collective there is enormous potential for us to leverage our economic power to spend our dollars with each other and those companies that are willing to stand up for us and against those issues that impact us such as anti-LGBT religious freedom laws, immigration, and unjust criminal justice system for black and brown people.

As the new administration thinks about banning Muslims, let us consider not flying U.S. airlines and implement a drive-only carpool policy plus leasing, buying, and renting foreign cars from dealerships owned by minorities. While they look at deporting millions of undocumented immigrants, let us collectively start moving millions of our dollars out of large national banks into minority-owned banks that will grant small business loans and mortgages that are non-predatory. Once they begin implementing state laws that allow businesses to evoke God in order to refuse to sells goods or serve LGBT families, let us start spending our dollars more with small local businesses that serve everyone–regardless of race, gender, gender identity, religion, or sexual orientation–and less with major national food and retail chains.

Make America Great Again For Us, Too

We witnessed how societal privileges played out in our political arena during the 2016 presidential election. Over the next four years, we needÂ to take our country back and Make America Great Again For Us, Too. This time the revolution will be televised and socialized in living color.