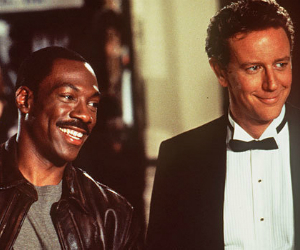 According to a report on The Wrap, Eddie Murphy and Judge Reinhold has signed on to do cameos in the pilot version of the hit movie franchise, ‘Beverly Hills Cop.’

Murphy is the executive producer of the TV series that may live on CBS.

Although the two will make an appearance, they will not star in the series which picks up where ‘Beverly Hills Cop 3’ left off, but starring Brandon T. Jackson as Eddie Murphy’s Alex Foley’s son.

It’s also being reported that Billy Rosewood (Reinhold’s character in the movie) has gotten a promotion and there is no other details about characters and roles.