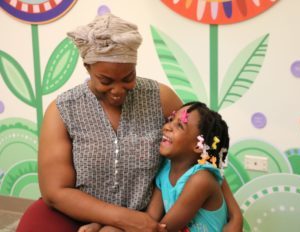 In 2012, when Brittany Turner visited her local Educare program for the first time, she was just a year shy of graduating from college. But life was throwing her a few dangerous curves that could have easily derailed her school plans. The most critical: She had a 6-month-old daughter, but no access to quality childcare.

“There’s nothing worse than leaving your child with someone who may not be following the guidelines,” Turner told me, “who just sits the kids in front of the TV all day.”

But the Educare school Turner’s co-worker had told her about was nothing like that. Educare is a state-of-the-art early learning preschool for children from 6 weeks to 5 years. A program of the aptly named Ounce of Prevention Fund, Educare uses evidence-based, high-quality instruction that incorporates what science says preschoolers need in order to thrive.

Turner couldn’t have placed her daughter in better hands.

The Importance of Early Learning

From birth to age 5 may seem like a kind of preliminary stage for children, as if at that age they aren’t fully human and don’t require intellectual and social stimulation. But that couldn’t be further from the truth, says Diana Rauner, president of the Ounce of Prevention Fund.

“The Ounce focuses exclusively on children in poverty,” Rauner told me. “We home in on the earliest years which is, science tells us, when there’s the greatest opportunity to support the health and development of strong cognitive structures, healthy social-emotional self-regulation skills, and a trajectory of positive success.”

The Ounce focuses on the child’s development within the context of relationships—family relationships as well as relationships outside the home. A public-private partnership, it provides an evidence- and research-based program to prepare children most at risk to thrive in kindergarten.

“One of our biggest social problems is the waste of human capital,” Rauner says. “The children who because of their challenges enter kindergarten without the self-regulation, communication, and self-advocacy skills to be successful, are not able to build capacity over time and end up being a cost to society.”

Skills in Self-Regulation, Communication, and Self-Advocacy

The problem is not insignificant. Rauner says the U.S. has 5.5 million children living in poverty; every year 1 million of them enter kindergarten unprepared.

“We want kids to enter kindergarten with self-regulation, communication, and self-advocacy skills, as well as the health and vitality they need to be successful,” Rauner says.

Of course, health is critical to school and life success. Turner told me that Educare provided vision and hearing screenings, as well as developmental screenings and dental care. For two years, Turner’s daughter received speech therapy at Chicago Public Schools and at Educare. Regular screenings like these in the early years go a long way toward preparing a child to excel once he or she starts school.

Which Turner’s daughter, now 5½, will be doing in September. Through Educare, she will be attending one of Chicago’s best public schools—a University of Chicago charter school that Turner describes as “awesome.”

For more information about Educare and the Ounce of Prevention Fund, visit its website.