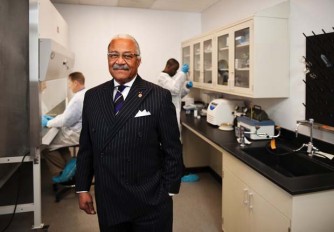 “Workforce readinessâ€ has become a buzz phrase to describe the ability–or lack thereof–of America’s current and future employees to succeed in a knowledge-based economy and develop new innovations. Amos L. Otis, CEO of SoBran Inc. (No. 65 on the BE Industrial Service list with $60 million in revenues), views this practice as an important part of his company’s success; and he puts his company’s money where his mouth is.

In the last five years, revenues have been steadily increasing year over year despite the recession for the provider of chemical, biological, radiation, nuclear, and explosive protective services, in addition to biomedical research support, engineering, and logistics. Otis attributes this outstanding track record to the workforce. With clients that include the Department of Defense, the Environmental Protection Agency, Eastern Virginia Medical School, and the Fleet Readiness Center Southeast aboard Naval Air Station in Jacksonville, Florida, SoBran’s revenues are expected to slightly increase to $61 million this year.

The former U.S. Air Force officer admits, however, his objectives aren’t entirely altruistic. “If your people are trained and have a high degree of professionalism, that is an added asset when it comes to your company being evaluated either for winning the contract or being allowed to even bid on the contract,â€ he says. “So, to have a staff that is properly trained and qualified is a significant benefit to the company.Â  It shows up on the bottom line as to how many contracts you get.â€

Since founding the company in 1987, Otis, 70, developed an education advancement program that covers up to $3,000 a year. In 2010, 36 employees took advantage of tuition reimbursement and 37 employees had certification courses paid for –amounting to nearly 10% of SoBran’s employees. He also developed a program so employees can finance the purchase of a home computer interest-free with the cost taken from their paycheck over a 12-month period.Â  He wants his employees to know “that they are backed up with the resources they need and strong management,â€ he says. “So, we try to keep them as highly motivated, trained, and educated as we can.â€

While the debate continues over lack of funding for American public schools and minority underrepresentation in the technical fields that are hailed as economic growth engines of the future, Otis and his team