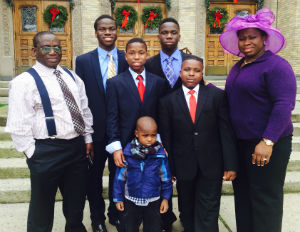 In honor of Mother’s Day, BlackEnterprise.com spoke with Roseline Ekeh (pronounced a-YAY-kay), the mother of Harold Ekeh who splashed across media outlets in theÂ spring of 2015 after learning he had been accepted into all eight schools in the Ivy League.

After meeting young Ekeh and his mother in person and being impressed with his kindness and confidence as well as his intelligence, I had to ask his mom–how did she raise such a son?

But first a little background. Roseline Ekeh and her husband and four sons (their fifth son was born here) came to the U.S. from Lagos, Nigeria, when Harold, the oldest, was 8. Although the family spoke English, their accents were so strong that it was difficult for Americans to understand them. “Even in the church, people did not want to talk to us,â€ Roseline said. “Someone asked me, ‘Do you speak English in your country?’ I answered, ‘But what am I speaking?’â€

She and her husband persevered, however, setting an example for their children. When Harold was little, other children at the playground did not want to play with him because they couldn’t understand him. “But he did not give up. He did not isolate himself. He kept going out to the playground,â€ Ekeh says.

The family moved to Elmont, New York, on the advice of a friend who recommended the town’s schools. “We were looking for high performance,â€ Ekeh says.

It looks as if they’ve found it.

10 Ways to Raise Your Child to Excel in the Words of Roseline Ekeh: