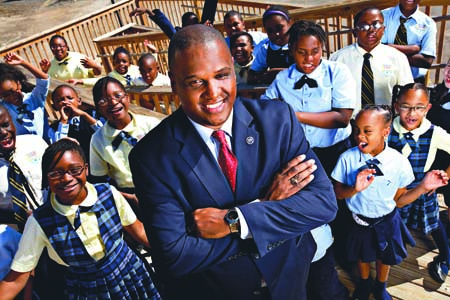 To paraphrase an old maxim: In the 21st century, the business of America is education. Nothing is more vital to the competitiveness and advancement of corporations large and small than a literate, tech-capable, and critical-thinking workforce.

Just ask Otha Thornton, president-elect of the National PTA and senior vice president of business development for Capital Commercial Development Group L.L.C., a construction company. He believes in a new, impactful version of mergers and acquisitions: develop productive private—public partnerships that create an exemplary workforce to be recruited by global industry in droves. He has come to grips with the disparities of the current work environment that, if not halted, will prove to be a harbinger for the future. The black unemployment rate is 15.7% compared with just 7.6% for their white counterparts–and this nation currently has 3 million job openings in tech-related fields.

As head of the PTA at Meade Senior High School in Fort Meade, Maryland, from 2006 to 2007, Thornton forged partnerships with more than 20 businesses, including Northrop Grumman Corp., Armed Forces Communications and Electronics Association, and Sotech Inc., to develop initiatives to improve schools. By working with Project Lead the Way, a national provider of science, technology, engineering, and math (STEM) curriculum, he used professionals and entrepreneurs to fully engage students. To get a sense of the difference this engagement made, prior to 2004, Meade did not make AYP, or annual yearly progress (state benchmarks that schools and districts are expected to meet); but in 2009, Newsweek ranked Meade in the top 6% ofÂ  U.S. high schools.

For Thornton, the critical factor driving education reform is putting “the right people around the table,â€ and identifying business leaders who will step up big time. He says of the effectiveness of programs like Project Lead the Way: “Parents and principals were able to go to corporations and say, ‘We’d really like to partner with you to give our kids the opportunity to see the relevance of the skills needed to be potentially employed with the companies.’ [In turn], some businesses offered students scholarships and internships while others allowed employees to come to schools to talk about their roles, exposing the kids to different opportunities.â€